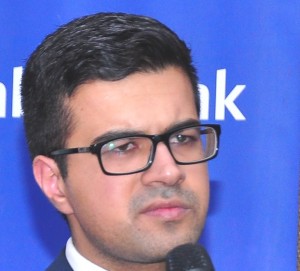 Qureshi said business conditions in Uganda’s private sector continued to improve albeit at a more moderate pace in  February.

However overall, this is the thirteenth consecutive month of strengthening operating conditions since the survey was launched in June 2017.

The PMI is a monthly composite index, calculated as a weighted average of five individual sub-components: New Orders (30%), Output (25%), Employment (20%), Suppliers’ Delivery Times (15%) and Stocks of Purchases (10%). Readings above 50.0 signal an improvement in business conditions on the previous month, while readings below 50.0 indicate deterioration.

“Business conditions in Uganda’s private sector continued to improve, albeit at a more moderate pace in February. The Bank of Uganda’s (BoU) Monetary Policy Committee (MPC) upgraded its GDP growth forecast for FY2017/18 to a range of 5.0% – 5.5% y/y from their previous forecast of 5.0% y/y. On annual basis the BoU expects GDP growth in 2018 to expand by 5.0% – 6.0% y/y, broadly in line with our own expectation of 5.6% y/y,” Jibran Qureshi, the Regional Economist East Africa at Stanbic Bank said.

BoU dropped the Central Bank Rate (CBR) from 9.5% to 9% reflecting an improvement in economic growth and projected an economic growth of 6% guided by a drop in non-performing loans to 5.6% from 10.5% and a revival in private investment activity.

The latest PMI data from Stanbic Bank and IHS Markit signalled a further improvement in the health of the Ugandan private sector in February. Amid stronger underlying demand, firms continued to win new business leading to a further expansion in employment. This drove the increase in business activity in the private sector. Meanwhile, inflationary pressures remained as average selling prices rose to accommodate greater cost burdens.

Staffing levels also rose in the private sector in February. Firms frequently mentioned that a higher volume of work was behind the increase in employment. Concurrently, due to greater operating capacity, companies were able to work through their backlogs in February. This continued the trend observed since the survey began in June 2016.

On a less positive note, purchasing activity contracted for the first time in nine months. Panellists mentioned that delays in payments from their clients led to cash shortages, thus prohibiting buying. Mirroring the trend in buying levels, inventories reduced for the first time in the survey’s history. Panellists blamed the use of inputs to support output growth and the fall in purchasing for the decline.

On the price front, total input costs continued to rise in February driven by higher purchase and staff costs. Higher raw material prices and fuel costs led to the increase in purchase prices, whereas rising costs of living were behind the rise in wages/salaries. Consequently, output prices rose in the Ugandan private sector in February.