October 4—Business confidence in Uganda took a slight hit during September according to the latest Stanbic Bank Purchasing Managers’ Index (PMI) that fell to 53.8 from 54.1 in August. The monthly survey involves responses from some 400 company representatives across various sectors of Uganda’s economy. 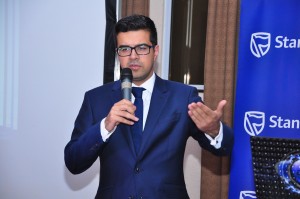 Qureshi said despite the drop, the average 54.1 during the last three months to September, was a better performance than the beginning of the year.

Jibran Qureshi, the Regional  Economist  East Africa  at  Stanbic bank said, “The headline PMI index fell to 53.8 from 54.1 which was recorded in August, however the average of 54.1 in the last three months to September, was still higher than the average of 51.6 in the first half of the year. The good performance on average is attributed to the coffee sector which supported growth.”

The Stanbic PMI is yet record a figure below 50.0 since the index was officially launched in April, however readings have been taken since mid last year.

Analyzing the various  business sectors  in the economy  Qureshi said  agriculture, industry, services and wholesale & retail  continued to  register  growth  of output and new business  inflows in September, but construction saw a decreased output and there were few or no new orders.

He said although agriculture performance was good,  the sector is still beset by the problem of Army worms which could still pose as a major threat to food crops and may mean prices at some local market may go up. However he said, September saw job opportunities being generated due to the ongoing new projects both in the government and the private sector.

Jibran observed that for the countries, economy to grow at the projected rate of at least 5%,  the government should put in place an conducive environment for the Uganda private sector to increase its appetite for credit and spur more economic activity. The economist comments come soon after Bank of Uganda reduced on its Central Bank Rate from 10% to 9.5% early this week.