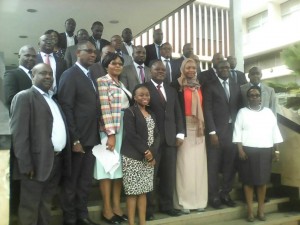 Participants for the four-day workshop ending Friday, are coming from other East African Community Partner states.

“It will be easier to put airplanes close to each other; hence we will be able to handle more departures and landings,” Richard Ruhesi, the CAA Director Air Navigation Service said during a validation workshop organised by the European Geostationary Navigation Overlay Service (EGNOS) in Kampala.

In attendance for the four-day workshop are representatives from other East African Community Partner states.  Aggrey Bagiire, the state minister for transport officially got proceedings underway.

Ruhesi said some of the advantages of SBAS as opposed to the current conventional instrument landing systems, include environmental benefits through a reduction of fuel burns as aircraft are able to take shorter routes due to introduction of performance based navigation. SBAS will also improve safety and accuracy by ensuring stabilized approach paths for flights. During exceptional interludes when an airport is busy, SBAS enables controllers to stack aircraft in a circle in preparation for landing.

In addition, the satellite based system procedures do not require any physical infrastructure at the airport served, but simply have satellite-based elements like reference stations, master stations and a geostationary satellite in place. This means savings in capital investment and recurrent expenditure for landing instruments.

The proposed system will also increase aerodrome accessibility as airports become more accessible from anywhere in the world. Ruhesi said once in operation, SBAS will go a long way in improving air navigation services within East Africa.

Once the new equipment is installed, air traffic controllers at Entebbe International Airport will be able to handle more airplanes with ease, a situation found at all major airports around the world.

Consisting of three geostationary satellites and a network of ground stations, EGNOS achieves its aim by transmitting a signal containing information on the reliability and accuracy of the positioning signals sent out by GPS. It allows users in Europe and beyond to determine their position to within 1.5 metres.

Eric Ntagengerwa, the East African Community (EAC) representative said SBAS will help in the liberalisation of the regional air space and help in creating new routes and connectivity. “The African continent is already working towards achieving a single African free air space market. For this to be possible, EAC countries will need to enhance their safety standards. SBAS will help in ensuring that all that is in place,” he said.