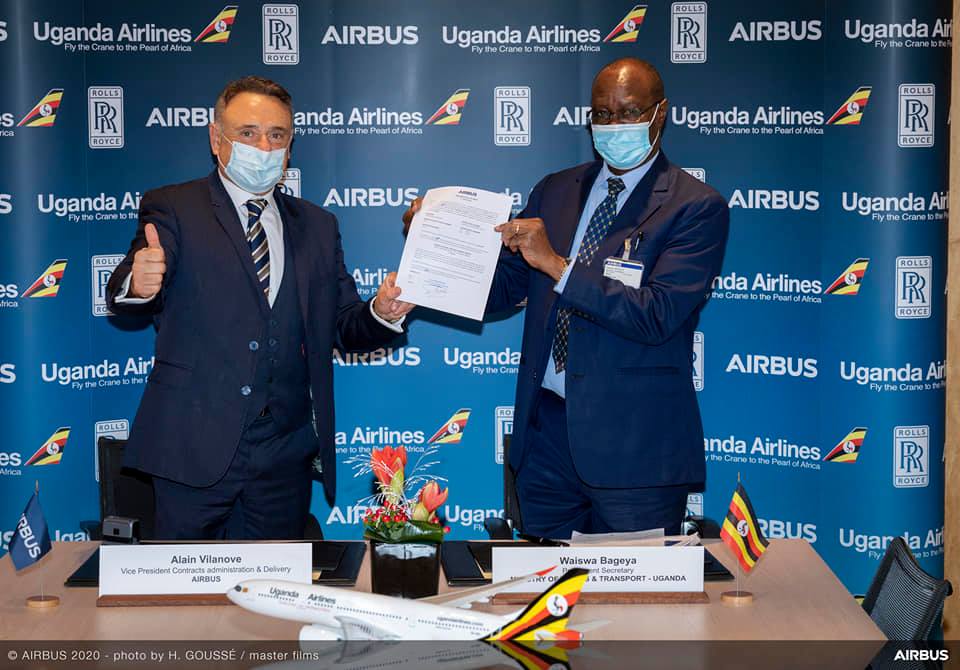 Flag carrier Uganda airlines has today taken delivery of the first of two A33-800 neos, ahead […]

Flag carrier Uganda airlines has today taken delivery of the first of two A33-800 neos, ahead of a ferry-flight to Entebbe tomorrow. The certificates of title to the aircraft with the appellation Mt. Elgon, were exchanged at a ceremony at the Airbus delivery centre at Toulouse Blagnac Airport. Ministry of Works and Transport Permanent Secretary Bageya Waiswa signed on the dotted line for Uganda while Alain Vilanove, Vice-President for contracts administration and delivery signed off for Airbus.

The ferry flight, designated UR404, will depart Toulouse at 1.00 am local ( 3.00 am East African Time) and touchdown at Entebbe at 11.00 am the same day. The aircraft will be received by a small team led by President Museveni but there will be an opportunity to tour the aircraft for industry stakeholders and accredited members of the public and the VVIP terminal at the old airport.

The flight will be commanded by Captain Michael Etyang, one the nine Ugandan pilots that have been qualified on the type. A veteran of the four-engine Airbus A340, Etyang and Captain Robert Wakhweya are the two Ugandans with a previous rating for Airbus aircraft. Wakhweya flew the A320 and later the A350 at middle eastern carrier Qatar.

The duo form part of the initial complement of 34 pilots that Uganda Airlines has hired to fly its A330-800’s.