Uganda Airlines is assessing the suitability of the Airbus A320neo for its next fleet acquisition, as […]

Uganda Airlines is assessing the suitability of the Airbus A320neo for its next fleet acquisition, as it looks at options for filling the gap between its short-range Mitsubishi CRJ900 and the long haul A330-800neo at the upper end.

The A320 and similar sized aircraft would address the 100-200 seat gap in the fleet which will become critical as the airline expands its network into central and west Africa. Uganda Airlines current serves 11 destinations but as travel restarts, officials are looking to ramp up route development to reach the initial target 19 routes during the first phase. 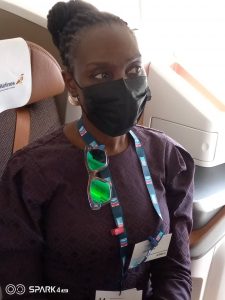 Speaking on the sidelines of the Dubai Airshow, where Uganda Airlines became the first African customer to sign up to Airbus’ Flight Hour Services covering the A330-800, interim chief executive Ms Jenifer Musiime, told 256BN confirmed that talks on near-term fleet growth with the European airframer had started.

A decision was tending towards the A320neo because of its’ range and ability to carry a full load out of Entebbe, which is a hot and high airport. Ms Musiime says that while the CRJ has the range to reach most of the destinations planned for the intra-African network, it was weight limited and would impose a trade-off between range and the number of passengers on board.

“We are already experiencing something like that on the Entebbe-Kinshasa route,” Musiime revealed.

Although the new-mint A220-300 also has the range to reach virtually all intercontinental destinations non-stop from Entebbe, it is not a candidate for now because its seating would max out 150 passengers in a two-class configuration. That would still leave a gap of 80 seats unaddressed between it and the 230-258 seat A330-800.

Uganda Airlines sees the larger A320 as a low-risk growth aircraft that provides the flexibility for substitution with the A330 on routes such as Mumbai during low season or frequency growth. The aircraft is also attractive because of the flexibility it provides for cabin-layout. The aircraft can accommodate lie-flat seats in the business class, or even premium-economy, which would permit product commonality between it and the A330.

Musiime did not indicate the number A320’s under consideration or the timeline for the acquisition but analysts believe a minimum of two would be required initially.

At the show, Musiime also signed cooperation agreements with Pakistan International Airlines and Sri Lanka Airways. The two tie-ups further underwrite the planned service to Mumbai by raising the potential for connecting traffic.

The airline has so far been shunned by its peers in the region such as Air Tanzania, Kenya Airways and Rwandair, who have refused to enter interline agreements with it. Industry analysts says this could be the result of a wait and see attitude given relative youth of the airline and the fact that is yet to embark on the IATA Operational Safety Audit -IOSA, a critical endorsement for safe operations by the industry.

Uganda Airlines launched its first intercontinental service to Dubai on October 4 and now awaits approvals to commence services to London, Mumbai, Guangzhou and Shanghai. To feed the service, the airline needs new connections to central and west Africa which will need aircraft with sufficient capacity for passengers and cargo.

The Dubai Airshow opened on November 14, to a massive 255 order for Airbus aircraft by Indigo Partners, signaling the rising optimism about prospects for an air transport industry that has been battered by the Covid-19 pandemic. Additional orders for 16 A220’s by Nigeria’s Ibom Air, 20 A320 and A321 neo’s by Jazeera Air and 111 eleven aircraft order by Air Lease Corporation covering the A220, A320/A321, A330 and A350 freighters, saw Airbus’s order tally at the show soar past 400 orders and commitments.

Airbus’ US rival Boeing had by Tuesday logged 82 orders including a pair of B737-Max and a single unit each for the B787 and Boeing 767 by Air Tanzania. The 767 will be a dedicated freighter while the 787 will join the existing fleet of two Dreamliners.