Uganda Airlines gets company as Kuwait Airways orders A330-800 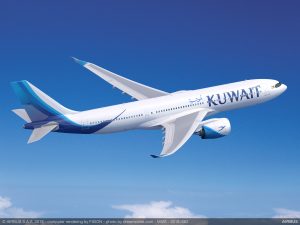 October 16, 2018 – Airbus has secured a second customer for the A330-800 neo after Kuwait’s flag carrier signed a Purchase Agreement (PA) for eight units of the model.

Kuwait’s endorsement for the smaller cousin of the new generation A330 that features new engines and a redesigned wing takes firm orders for the type to a total of 10 aircraft and takes the model from the fringe after major operators converted their orders to the larger A330-900 neo.

Uganda Airlines which placed an MoU for two -800 neo’s during the Farnborough Air Show last June expects it first delivery in the last quarter of 2020.

Airbus says deliveries to Kuwait Airways which include the A350 XWB and A320neo will commence in 2019.

“The A330-800 will seamlessly fit into our fleet expansion and growth plans. Its unbeatable operating economics and performance in addition to best in class passenger comfort make it a sound investment,” Yousef Al-Jassim said.

The announcement marks an important step in Kuwait Airways’ fleet renewal and expansion strategy. The national carrier also has A350 XWB and A320neo family aircraft on order.

“We are delighted that Kuwait Airways has chosen the A330neo as a cornerstone of its future widebody fleet.  The A330-800 with its unique efficiency and versatility will support the carrier’s ambition to develop its expanding long haul network,” said Christian Scherer.

The A330 is one of the most popular widebody families ever, having received over 1,700 orders from 120 customers. More than 1,400 A330s are flying with over 120 operators worldwide.

Uganda Airlines became the sole customer for the type after Hawaiian switched its order to the competing Boeing 787-800. Air transport experts predict that the -800 time will come when airlines begin to replace the baseline A330-200 in the mid-2020’s.