Home » Business » Uganda Airlines CRJ’s back in service after mishaps

Uganda Airlines CRJ’s back in service after mishaps 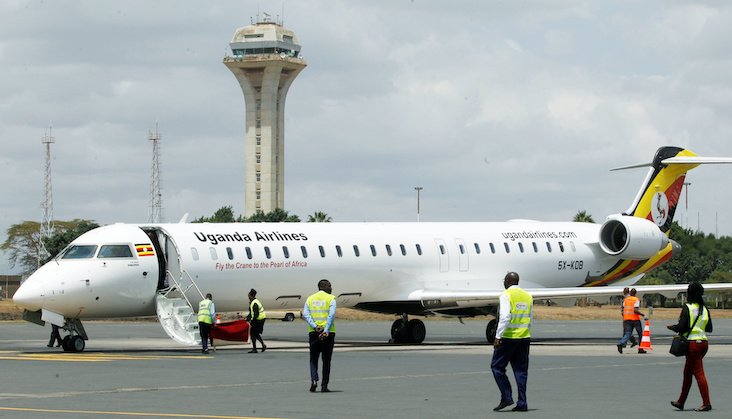 All four of Uganda Airlines Mitsubishi CRJ-900 aircraft (popularly known as Bombardier), are back in the […]

All four of Uganda Airlines Mitsubishi CRJ-900 aircraft (popularly known as Bombardier), are back in the air, following separate incidents in which one lost engine blades and another suffered damage to the engine intake cowl.

The fleet details form part of a management response to a June 21 letter by suspended board chair Pereza Ahabwe, in which he raised red flags about issues he said were getting out of hand at the airline.

On April 10, 2021, aircraft registration 5X-EQU suffered engine damage after ingesting foreign object debris during the take off run for a service from Nairobi to Entebbe. According to a pilot familiar with the event, it registered as vibrations in the right-hand engine; on the engine indicating and crew-alerting system display in the cockpit. But the vibrations remained within tolerable limits and the powerplant was not shut down. The flight continued without further incident to a normal landing at Entebbe where subsequent inspection found extensive damage to the fan blades. In all, 22 of the 28 blades on the General Electric CF34-8 turbofan were damaged and required replacement.

The aircraft also suffered damage to the engine intake components, including the acoustic intake barrel, flow path and engine rub strip. However, a borescope inspection established that the damage did not extend to the core of the engine.

Also replaced was the right-hand side main landing gear assembly, whose failure on contact with an object on the runway is believed to have been the source of the debris that found its way into the engine. 5X-EQU was returned to service on May 18, after the manufacturer sourced the replacement parts and completed repairs.

Another aircraft, registration 5X-KDP, was temporarily withdrawn from service on May 15, after suffering a bird strike to is left-hand engine, as it took off from Entebbe for a service to Juba. The incident resulted into damage to the engine inlet cowl outside permissible limits.  Officials say to avoid having two aircraft being grounded at the same time, a cowl was borrowed from 5X-EQU which was still undergoing repairs at the time. Kenya Airways maintenance shop was then hired to repair the cowl whose replacement cost would have reached USD 0.3 million. The process of shipping the cowl to Nairobi however suffered a hiccup when Kenya customs assessed a tax value of USD 27,000 on the component. After discussions, it was returned to Entebbe where a team from Kenya Airways arrived with the necessary tools to carry out the repairs. The repaired cowl was handed back in time for the return to service of 5X-EQU, from which it had been borrowed, on May18.

In his letter titled “Urgent and Risky Issues to Address at Uganda National Airlines Company Limited,” addressed, to the Permanent Secretary Ministry of Works and Transport, Ahabwe had warned that prolonged grounding of the aircraft, would attract high costs in recertification, prior to return to service. He also warned about the likely negative impact of the suspensions of key personnel on the costs, operations and safety, as well as potential revenue losses from ineptitude by inexperienced staff who were now in charge of the airline.

Ahabwe also warned about potentially costly litigation as a result of the migration from the reservation system vendor HITIT that was hired in the interim, to the rival Amadeus.

In their response however, the interim management dismisses Ahabwe’s concerns as unfounded and based on incomplete information. The managers contend that the separation with HITIT, was happening within contractual terms. The airline also defends the USD 900,000 cost attributed to the procurement of an Enterprise Resource Planning system, saying that figure was a projection of the 10-year cost of ownership for Amadeus, and the five-year cost for the Oracle Enterprise Resource Planning system.

The interim team also allays fears of possible revenue losses as a result of users not being properly trained to manage the system, saying all critical end-users have been certified on the Enterprise Resource Planning System which is now at 80pc completion.