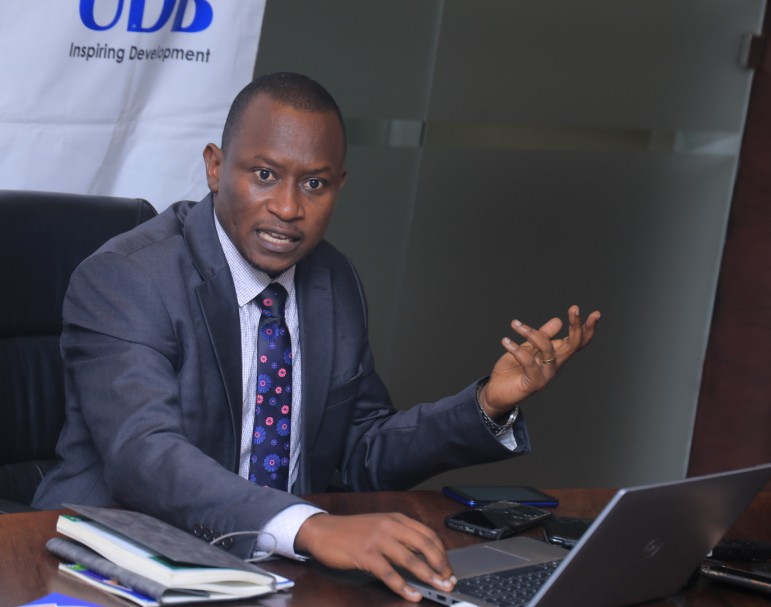 Dr. Mwesigye said the results reflect the bank’s sustained contribution to the economy, augmenting the production of essential commodities amidst the shock of the Covid-19 pandemic which affected all the sectors, increased the cost of living, and disrupted global trade and markets.

The impact of Uganda Development Bank Limited (UDBL) financing to selected enterprises during 2021 has resulted in total profits of UGX314 billion (just over $80 million) and creation of over 40,000 new jobs.

Speaking during the launch of the UDBL 2021 Direct Impact Report this week, Dr. Francis Mwesigye, the Director Economic Research and Knowledge Management said, “These results reflect the bank’s sustained contribution to the economy, augmenting the production of essential commodities amidst the shock of the Covid-19 pandemic which affected all the sectors, increased the cost of living, and disrupted global trade and markets. This Direct Impact Report 2021 demonstrates that UDB’s presence in the economy has had an overall positive impact.”

According to the report, a total of 41,338 jobs were created and maintained, and a total output value of UGX 2.445 trillion produced. This output generated a total profit of UGX314 billion for the companies financed by UDBL and contributed UGX84 billion in form of tax revenue to the government in addition to UGX405 billion in foreign exchange earnings.

In line with the bank’s effort to democratize economic participation, the DI report notes positively that over 30 pc of companies funded by UDBL are owned by women. Furthermore, the dedicated funding program for Women and Youth known as Special Programs launched in 2021 is to be expanded to reinforce these targets as women and youth together constitute the most active segments in the economy as well as the most numerous.

The report tracks UDBL’s socio-economic footprint against its strategic plan and the country’s national development priorities. In addition, UDBL looks at its High Impact Goals which are aligned with engendering holistic sustainability, inclusion, community development and environmental protection.

Latest findings show a steady decline in the share of imported raw materials by manufacturers funded by the bank. This was more evident in the last two years; 2020 and 2021.

The global disruptions in the supply chain during the pandemic led to an increased focus by UDBL on import replacement industries and a shift to alternative local sources of raw materials; which has helped to save foreign exchange. The results also show that the major export destination for the enterprises financed is within the East African Community and Common Market for Eastern and Southern Africa (COMESA) countries at 60 pc and 10 pc respectively.

UDBL is the country’s national Development Finance Institution (DFI) with a mandate to accelerate socio-economic development in Uganda through sustainable financial and non-financial interventions. Consistent with this mandate, the Bank supports projects within the private sector that demonstrate the potential to deliver high socio-economic value, in terms of job creation, improved output, tax contribution and foreign exchange generation, among other outcomes.

Dr. Mwesigye said, “I would like to thank our customers, with whom we partner to deliver these results. I do reiterate our commitment as UDB, to deliver our mandate by deliberately focusing our efforts on interventions that create sustainable impact, thereby improving the quality of life of Ugandans.”

The share of jobs created and maintained per sector was highest in agro-processing at 41 pc, followed by primary agriculture at 30 pc. Manufacturing, infrastructure and tourism sectors contributed 17 pc, six percent and three percent respectively while other sectors that the UDBL supports, including health and education accounted for four percent.

The bank through its investments continues to facilitate the growth of a vibrant and sustainable private sector. During 2021, the highest profits posted were in manufacturing which contributed 39 pc, followed by agro-processing at 32 pc, and 21 pc for the primary agriculture sector. The tourism and health sectors contributed four percent and two percent respectively.

In terms of taxes, the manufacturing sector contributed the highest share of the total UGX84 billion at 45 pc. This was followed by agro-processing at 25 pc, primary agriculture at 23 pc and three percent for both infrastructure and tourism respectively.  The health sector contributed one percent of the total share of tax revenue reported while education had no contribution in light of the Covid-19 pandemic lockdown measures.