INSTANBUL, MARCH 1- Turkish flag carrier Turkish Airlines has broken through the one billion barrier for […] 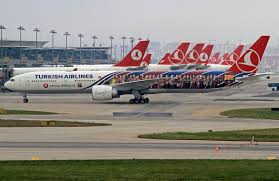 INSTANBUL, MARCH 1- Turkish flag carrier Turkish Airlines has broken through the one billion barrier for the first time, posting $1.069 billion in profits for the 2015 trading period.

In financial statements to market regulators, Turkish earned $895m from its core operation – a 32 percent increase- off $10.522 in revenues. Defying a politically and financially challenging year for the county EBITDAR was $2.6 billion A 13.6 percent growth in available seat kilometers saw the airline carry 61.2 million passengers on 453,000 flights that averaged a load factor of of 78 percent.

“Turkish Airlines has reinforced its position among the most profitable airlines with these financial results recorded in this challenging year despite the fierce competition environment in the global Aviation industry and also the political and economic instabilities over its operating environment and significant currency fluctuations,” commented Turkish Airlines’ Board and Executive Committee Chair’ Mr. İlker Aycı.

Turkish operates to 284 destinations in 113 countries using one of the youngest airline fleets in the world totaling 304 aircraft.