September 5, 2018—Small business owners and city traders continue to complain about high taxes even as […]

September 5, 2018—Small business owners and city traders continue to complain about high taxes even as the government is forced to close the mounting budget deficit, but a junior trade minister said on Tuesday street protests contribute little in making things better. 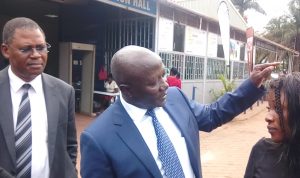 Badagawa looks on as Ngume is given a tour of the Expo exhibits on Tuesday.

He said if the demonstrations and instability continue, Uganda’s economy will be hurt on both macro and micro economic level.

“We all know a country that has no peace and stability cannot prosper economically. If you continue to burn tyres, your products will be blacklisted on the global market. Investments will not come and you will be producing for nothing, because your goods will not have market. The image of this country must be protected,” Fred Ngobi Ngume, state minister for cooperatives said during the official opening of the 13th International Trade Facilitation Expo organized by the Private Sector Foundations of Uganda (PSFU) in Kampala.

He was referring to the recent violent incidents in downtown Kampala when protesters blocked roads with burning tyres over the detention of legislator, Robert Kyagulanyi (popularly known as  Bobi Wine). Kyagulanyi is now in the United States for further medical treatment.

However the traders who attended the event which ends today, were more concerned with the increasing tax burden, low prices for agricultural products, high interest rates on loans and the involvement of foreigners in retail business. The Minister suggested traders organize themselves into groups or cooperatives so that they can easily be helped by the government.

Ngume said the government has already put aside UGX100 billion (nearly $27 million) in concessionary funds for grain traders to borrow from commercial banks and buy up surplus maize. The move was intended to help shore prices that had plunged more than 50 pc due to good harvests across East Africa and limited the usual regional sales.

The Minister also asked young people to be more innovative and come up with ways of earning money instead of spending their time causing violence. The government is currently has in place the Youth Livelihood Programme (YLP), but implementation remains controversial with widespread complaints over disbursement of funds, slow recovery of the loans and cases of corruption. This financial year the government has allocated UGX66 billion (about $17 million). Critics also say the YLP revolving fund is too ambitious considering the limited amounts of cash it has to lend out and the huge demand for start-up capital across Uganda.

Gideon Badagawa,  PSFU executive director asked the government to consider giving young entrepreneurs a grace period of about three years before they pay taxes so as to give them a chance to grow their enterprises. “The main aim of this Expo is to give an opportunity for the private sector to raise issues that are affecting them as well as get information from government agencies on government policies, programs and economic plans,” he said.