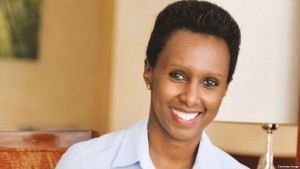 Nibigra is a passionate believer in the power of tourism to lift the fortunes of a country.

February 20–Tourism has the potential to positively transform an economy if governments show the willingness in implementing policies that are supportive including provision of infrastructure and security.

“Without a political will from the central governments, nothing can be achieved,” Carmen Nibigra the Regional Coordinator of East African Tourism Platform (EATP) said.

A passionate believer in the power of tourism to lift the fortunes of a country, Nibigira said, “After achieving political will, we can then go about finding ways of boosting tourism, first by encouraging our fellow countrymen to partake in the tourism venture.”

Under the theme, ‘Tourism is Everybody’s business’, the expo attracted a cross-section of government officials, industry representatives and the general public to share ways in marketing Uganda’s tourism attractions.

She said as a way of boosting regional tourism, Kenya, Rwanda and Uganda launched the East African Tourism Portal which will target both the domestic and regional markets.

The East Africa Tourism Platform (EATP) was set up in July 2011 funded by TradeMark East Africa, to facilitate active and focused engagement of the private sector in the EAC Regional Integration process. The platform became operational on 2nd April 2012.

Ernest Kayinamura, the Chief Executive of Hexacomb which developed the new web portal, said it shows the world how beautiful the three countries are by showcasing different tourist sites.

“It will, in addition to creating awareness, also drive revenues for the three countries because it will be a one stop centre of information for all potential tourists,” he said.

Godfrey Kiwanda, Uganda’s State Minister for Tourism, said tourism is one of the growth sectors which will help transform the country into middle income status by 2020. He said the collaboration and partnership to promote the sector in the three countries is another landmark which will sell the country further in addition to the aggressive marketing already being done.

EATP became the first regional tourism apex body put into place that is able to lobby at the EAC level and also at the level of national governments; acting as the common platform for facilitation of private sector and public sector discussions and addressing tourism development and promotion issues at a regional level.