Too many cooks hold back Uganda’s SGR plans

June 18, 2018 in Infrastructure, Transport by Editor 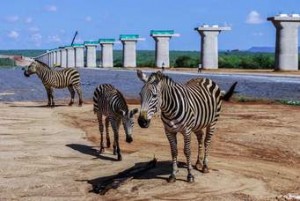 June 18, 2018 – Implementation of Uganda’s Standard Gauge Railway project have run into further uncertainty as external actors put the project team on the defensive in a dispute over the cost of development.

That is the question that has put President Museveni and his advisers on hand, at odds with the SGR project team led by Engineer Kasingye Kyamugambi and Ministry of Works technocrats on the other.

Museveni who is eager to achieve financial closure of the project this year, is convinced that the U$2.3 billion contract for the 273 kilometre Kampala- Malaba section is inflated. This view is informed by reports presented to him by retired Engineer Badru Kiggundu, the parliamentary committee on infrastructure and lobbyists angling for Turkish and Tanzanian interests.

Faced with a huge current account deficit, Turkey which has been fighting for a piece of Africa’s massive investment in infrastructure, has teamed up with Tanzania to dangle a lower cost in a bid to convince Uganda to route its SGR through the Dar e salaam instead of Mombasa.

Matters have not been helped by a benchmarking visit to Addis in December 2016 by members of the parliamentary committee on infrastructure, which returned with a verdict that Uganda’s SGR was overpriced.

Their report claimed that contrary to what was being publicly stated, the project team was going to build a class two railway but was billing for class one because it has similar specifications to  the Ethiopian and Kenya SGR. The committee, which defined class one as a system with trains running at speeds above 300km per her hour, concluded that there was no class one railway system operating anywhere in Africa.

Kiggundu’s team said the cost had been inflated but rather than offer a lower cost for the proposed design, they instead recommended a change of specification to class two. Kiggundu proposed the removal of embankments and electric trains from the design. He argued that Uganda does not need a class one railway system because the current volumes of trade did not justify it.

Museveni disagreed with Kiggundu on the last point because he believes that cargo volumes out of Uganda will rise to 2 million tons per month when the country resumes mineral exports over the course of the next 10 to 15 years.

That prompted him to appoint another team led by Professor Edward Rugumayo which, while agreeing with the cost presented by the project team, doubted the need to electrify Uganda’s trains since Kenya was operating diesel locomotives. But the project team insists that Kenya plans to switch to electric trains in five years’ time to create seamless connectivity with Uganda.

It remains to be seen how and when President Museveni is going to reconcile the competing views to make a final call but  the project team has tried to impress it upon him that Uganda is getting fair value for money for the kind of railway it is building.

The team points out that all its detractors have focused on the upfront cost of building while ignoring the life-cycle costs of operation and maintenance as well as the key design differentiators between the Northern Corridor SGR project being developed by Uganda and Kenya and what Tanzania and Ethiopia are building.

According to their presentations, the Ugandan and Kenyan system has been designed to deliver a high availability rate of 98 percent. That translates into a downtime of just 7 days in a year for routine maintenance.

The life cycle maintenance costs will also be just $41,000 per kilometer annually, compared to $150,000 per kilometer for Tanzania’s proposed American Standard railway, over the 30 year design life of the network.

In a March 2017 rebuttal to parliament, Works Minister Ms Monica Azuba Ntege,  warns that changing the SGR’s specification at this time, would roll back implementation by three to four years since fresh designs and procurement would have to be undertaken.

“Kenya, Uganda, Rwanda and South Sudan, the signatories to the Northern Corridor Infrastructure Project all agreed to a seamless class one regional railway network and the feasibility, contracts signed and technical documents submitted to financiers indicate that Uganda is building a class one railway system,” she says in response to claims that project team was building a lower specification than what has been presented.

She also points out that while the parliamentary committee was looking at the cost based on the 273km point to point distance between Malaba and Kampala, the entire track length including bypass loops and shunting lines was equivalent to 338 kilometres.

She explains that Uganda’s SGR would cost more per kilometer than the Ethiopian line because the base rock in the Lake Victoria basin where the route of Uganda’s SGR passes will see piles being sunk to a depth of 50 metres in some places compared to a maximum depth of just 20 metres in Ethiopia. Uganda’s SGR will also have 64 bridges covering a total length of 22 kilometres. The longest of these will be 2.6 kilometres, compared to just 155 metres for the longest bridge on the Ethiopian network.

“It is important to note that there is no universally agreed classification of railways in the world. American classification for example is based annual revenue the railway generates, while British classification is based on structural gauge such as the height of trains. China Class 1 is determined based on the role of network, annual freight volumes, speed and curvatures among others,” she says.