Home » Opinion » Columnists » TO FLY A DREAMLINER: Amateur in the cockpit

TO FLY A DREAMLINER: Amateur in the cockpit

Full Motion Flight Simulators are usually the reserve of airline pilots and engineers. But during a […] 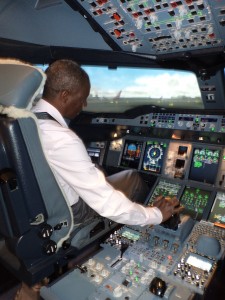 Powering for takeoff on Heathrow’s Runway 27

Full Motion Flight Simulators are usually the reserve of airline pilots and engineers. But during a rare visit to the British Airways flight training division at Heathrow, I get the opportunity to fly two of the world’s latest aircraft on the devices that give a realistic simulation of flight. I soon discover that despite the high levels of automation, it still takes a lot of training and skill to safely fly a modern day jet.

My date had been with the Boeing 787 Dreamliner but a 30 minute window opens up on the Airbus A380 simulator. After a quick discussion with Simon Axby, BA’s Flight Simulator Engineering Team Leader, I trade part of my two hour session on the Dreamliner for the A380.

Inside the device, I find the degree of virtual reality simply amazing. From the double-decker’s generous cockpit to the ambient light and the view out of the window, everything looks so realistic. To both my left and right, I can see aircraft parked around Heathrow’s apron. The buzz from the auxiliary power units and the rumble from aircraft landing or taking off from either of Heathrow’s two runways sound real.

The November sky is grey as I settle into the captain’s seat (the left hand seat). The pre-flight briefing begins with Simon showing me how to strap into and break free from the seat harnesses – restraining devices – that are far more elaborate than the seat-belts in the passenger cabin but which unclasp in an instant at the mere touch of a button at the centre. Next we go through the instrument panel – a set of levers, switches and screen displays on which information about the status of various aspects of the aircraft, navigation and flight profile is shown.

It comes as a shock to learn that keeping the aircraft on the correct flight profile will require more than looking out of the window. Am supposed to pay keen attention to a set of marks on a screen and make sure the lines representing the wings intersect or are aligned correctly on a virtual axis. This is not your idea of fun unless you are sixth grader accustomed to playing video games. The other key instrument to watch for my amateur purposes will be the attitude indicator or artificial horizon; an oval-shaped two-colour display with a horizon line separating the top sky-blue coloured half from the bottom dark red coloured half.

The display mimics the movement of the aircraft on all axes giving the pilot a sense of the attitude of the aircraft in the absence of visual references from outside. This comes in handy when flying through cloud or in darkness when it is difficult to tell whether you are flying away from or into the ground.

“Too much blue means your nose is pointing too high and too much red means you are facing steeply downward and risk running into the ground,” Simon tells me.  But too much blue is no comfort either. Point the nose two high and the airflow over the wings will weaken to a point where the aircraft, unable to sustain climb enters into a dynamic stall with disastrous results, barring a timely recovery.

Finally it is time to take to the skies and the massive Rolls Royce Trent engines come to life one after the other until all four are alight. I release the breaks and gently nudge the power levers forward. Weighing in at more than half a million kilogrammes, the huge machine ambles forward. Using a steering wheel no larger than fifteen centimetres in diameter am surprised at the ease with which the A380 responds. Outside, I can see traffic as we slowly taxi to the runway and position the aircraft for take-off. Pushing the power levers to the Take-Off-Go-Around (TOGA) thrust position; the machine gains speed and in just under two minutes of the take-off run, an aural callout announces we have reached V1(Velocity 1) the speed at which we can lift off. This is almost immediately followed by the call for rotation and I gently pull back on the side-stick (a handle similar to a joystick or the gear lever of an automobile) to get the A380 off the ground. Climb is smooth with the aircraft holding steady as we enter a turn that gives me a good view of the farmland around Heathrow. In the distance I see aircraft lined up in the air in the other corridor waiting their turn to land.

We do one circuit around Heathrow before Simon places the aircraft at final approach 12 nautical miles from the runway. He takes me through how the glide slope works and because am flying manually in visual flight rule conditions, we don’t go into the instrument version of this approach. From this distance, I can see a set of white bars either side of the runway. The purpose is to help the pilot flying zero in on the runway centre-line while also adopting the correct nose angle for the approach.

You know you are on the correct course when two bars on either side of the runway display as white and two bars are seen as red. Whenever the angle of approach deviates from the ideal you either see all white meaning you are way above the glide slope or red, meaning you are flying below the slope. It is a moment of intense concentration as I keep pulling back and forth on the side-stick as the aircraft bobs up and down the slope. In the meantime, I have to keep the speed neither too fast nor too slow – the former risks a hard landing and runway excursion while the latter could see you lose speed and fall out of the skies like a stone. 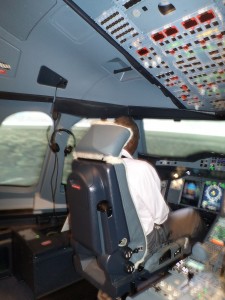 Final approach to London in the A380

Simon pulls a lever and the landing gear drops. Just before touch down, I ease the nose up a degree to avoid the tail striking the tarmac. The main wheels touchdown and the aircraft bounces up once before the nose wheel settles down. The white markings indicating the touchdown zone, whiz past and I slam on the breaks as I struggle to keep the aircraft on the runway. It is surprising how in the heat of the moment you forget this is just a drill and the heart actually races. The A380 is an amazing aircraft in many respects. It is really quiet and it takes a while to believe that you are actually climbing. The flight envelop protections are so superb to the extent that I cannot not roll it outside the safe zone. The responses to the inputs via the side-stick are smooth yet instant.

Next we take off for Hong Kong and fly the scenic approach through the impressive built environment, the vast computing power available generously populating the view ahead.  We do a touch and before returning to Heathrow where I execute another bumpy landing.

Stepping back into the real world, we take a coffee before entering the Boeing 787 simulator. The Dreamliner with its traditional control yoke is a more familiar configuration for someone used to the steering wheel. Yet it is sensitive to a degree that can be unsettling for the uninitiated. A feather-light nudge here and the response is immediate sending the plane into a dive or steep climb. The flying principles are the same though and apart from the control yoke, lighter weight and smaller cockpit area, the 787’s instrument layout is basically the same as on the A380.

I feel on more familiar ground as I gently pull back on the yoke at rotation. True to its reputation, the Dreamliner is as nimble as a glider and from the cockpit, the huge Rolls Royce Trent 1000 power plants that power this twin engine aircraft are barely audible. I ask Simon to key in New York John F Kennedy and in an illustration of time travel, we are on the approach to JFK in an instant. The simulation is so realistic that in the distance, I can even see the Freedom Towers that stand at the site of the former World trade Centre. 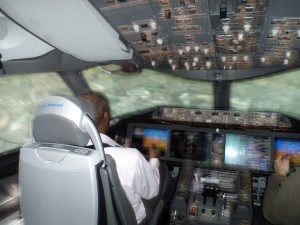 Fighting against the crosswind at JFK

But keeping the Dreamliner on the glide path is far more challenging and we veer off the runway immediately after a landing that is way too fast. Simon takes us back to final approach and this time I ask him to put in some weather. I wanted to know what landing in a cross-wind felt like. He briefed me about what to expect and this time I was supposed to trust what the instruments were telling me. As we glide down, I briefly look out and the nose is pointing almost 15 degrees left of the runway yet the instrument landing system tells me we are on course. In a panic, I lose faith just before touchdown and try to correct course. It is a disaster. Again we are off the runway and the aircraft is uncontrollable as we plough through the soft ground before coming to a halt. I realise that my heart is racing and I Am actually sweating.

We go through a review of what went wrong and when we disembark, it is surprising how tired I really feel. Simon goes to a machine and gives me printouts of my performance. None was near perfect but I had made more stable approaches on the A380.

Flying a simulator is a sobering experience that disabuses one of many notions about flying. The thrill of defying gravity and being in control of these amazing machines is really fun, especially during the cruise phase in benign skies. But maintaining safe flight is also hard work, demanding high levels of concentration for the auditory and visual senses. The outcome of this experience is that I feel a lot more comfortable flying these days. Many of the bumps that we call turbulence actually feel a lot less threatening from the cockpit because you feel in control. But more important is the realisation that if one follows the rules and the machine and ground aids are in good condition, flying need not be a hazard.