Three government agencies to be housed in one location 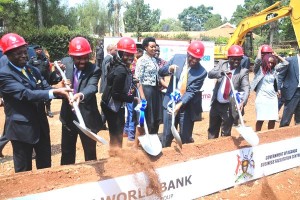 Dr. Rugunda ((third right) is joined by other heads of the three agencies and Evlyn Anite (third left), the finance junior minister, to lay the UBFC  foundation stone.

February 2—Three government agencies will be housed in one new building after the foundation stone of the proposed Uganda Business Facilitation Centre (UBFC) was laid in upscale Kololo on the outskirts of the Kampala city centre.

The World Bank through the $100 million five-year Competitiveness and Enterprise Development Project (CEDP) is paying for most of the costs.

“Once the UBFC is completed, it will save government some UGX3.4 billion (nearly $1 million) annually in rent that is currently being paid by the three agencies. These savings can be redirected to meet other development priorities,” Dr. Ruhakana Rugunda, the Prime Minister said during the ceremony.

All CEDP) projects are coordinated by the Private Sector Foundation Uganda (PSFU) and are meant to help provide infrastructure and systems that allow the government to be more responsive to the needs of business. The World Bank head of communications, Sheila Kulubya said the project was funded to improve Uganda’s trade and the business environment. Once the new office block is completed, the government hopes it will improve the country’s ranking in the ease of doing business, which has since dropped seven places as its peers—Rwanda and Tanzania continue to climb higher.