September 28, 2017 in Communications by Editor 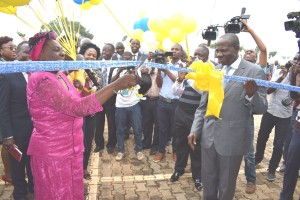 Karooro officially opens the event with Kasaija, that was intended to showcase what government ministries, departments and agencies do with tax payers’ money.

September 28—Several thousand Ugandans turned up at the Kololo Independence Grounds for the tax payers appreciation week organized by Uganda Revenue Authority (URA) which showcased what the government does with tax payers’ money.

Doris Akol, the URA Commissioner General said, “We do not take it for granted that all of you are here today. You could have chosen to go do your private businesses. This shows us that you appreciate the work we do and encourages us to continue doing our mandate.”

The event was officially opened by Mary Karooro Okurut, the Minister in-charge of General Duties in the Office of the Prime Minister, who represented President Yoweri Museveni as the guest of honour. Also in attendance was finance minister, Matia Kasaija together with top officials from the public and private sector.

Karooro said the government has zero-tolerance towards corrupt officials who steal public money for personal use.”I am warning you, if you are thinking of involving yourself in taking public money, you will be held accountable. We shall not tolerate a few individuals crippling service delivery, because of their selfish desires,” Karooro said.

She asked Ugandans to always take advantage of such events to seek information about different programs that are being done by government and how they can exploit them to improve their lives.

The URA Board chairman, Simon Kaguguba suggested that the government puts in place a proactive approach to public accountability.

“Events like this one are very recommendable for creating satisfaction with in the general public, because it creates transparency and creates good relations between the tax correction bodies and the tax payers hence easing the process of tax collection. I commend the government and URA for this initiative,” he said. 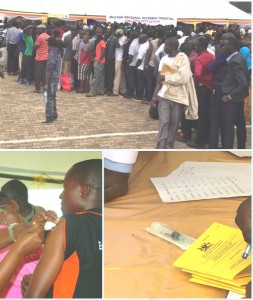 Many in the crowd at Kololo on the outskirts of the city centre, came for the free medical check-ups that included a free Yellow Fever vaccination. Other free services included URA registration, National ID registration and verification, legal and financial services that were offered by private and public organizations that are exhibiting at the event.

With the theme ‘My taxes work’, the event ends Friday and is intended to give a platform to government agencies and ministries to showcase what they have been doing with tax payers’ money. Akol said, “I also want to take this honour to congratulate the different Ministries, Departments and Agencies (MDAs) that are here today. We know you are very busy people, we appreciate the dedication to contribute to the public accountability week.”