There is some method to M7’s madness after all

On December 20, the CSO’s under their umbrella Civil Society Budget Action Group CSBAG convened a […] 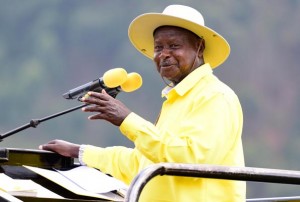 Museveni on the campaign trail

On December 20, the CSO’s under their umbrella Civil Society Budget Action Group CSBAG convened a press-conference during which they highlighted shortcomings in the 2016/17 budget priorities and the hasty manner in which the executive was trying to get parliament to pass the budget framework paper without adequate time for critical review.

Many things that the Museveni led National Resistance Movement regime does often appear to defy logic but the President’s new year message gives some insight into the logic behind some of the critical decisions that this government has made which suggest that there might be method to the apparent madness of its actions.

As usual, Museveni is convincing but leaves one wondering what could happen if the big man and the country for that matter just made an attempt to make an honest walk of the talk. Below, the edited version of the address as published by the Daily Monitor:

I greet all of you and congratulate you on finishing 2015 and wish you a prosperous 2016. I extend condolences to the families who lost their dear ones in the year that has just ended.
The UPDF has defeated Kony, ADF and disarmed the Karimojong warriors. There is now total peace in the whole Uganda.
The strategic goals of Ugandans should be prosperity and security. We are talking of prosperity through production and not through parasitism.
With economic integration, we aim at the formation of the common market of the whole Africa. We have already resurrected the EAC and formed COMESA. Uganda will become a middle-income country by 2019 and an upper middle income country by 2040.

The ultimate security means the ability to guard our sovereignty. The guaranteeing of our sovereignty should not depend on anybody else except ourselves and like-minded allies of similar interests and a common destiny, if necessary.
Since 2006, we started resisting the mistake of spending on consumption before we spend on development and wealth creation. We also prioritize among priorities.
As for the roads, by combining our own money and some limited funds from outside, all the major roads will be tarmacked in the next five years or less.

Some of the roads are already completed, some are on-going while others will be commenced on later. It is unprecedented in the history of Uganda to have so many roads being worked on at the same time and most of them being funded by the government of Uganda.
We are going to build a Standard Gauge Railway either with a soft loan from China or, later, using our oil money. The ICT backbone has been done with a loan from China.

We have gone far on the side of human resource development. The immunisation has stopped our children from dying young. The infant mortality rate is now 54 per 1,000 live births. It used to be 156 per 1,000 born alive babies in 1986.
On my advice and strong insistence, the NRM Parliamentary Caucus and Cabinet, following the Conference of Statistics House in 2006, prioritised six areas: Defence and Security; Health, especially immunisation; Education, including the innovation of UPE, USE and UPET – mass education as opposed to elite education, the roads, electricity and ICT.
Our line since 2006 was: “spend something everywhere but spend decisively in some sectors”. As a consequence of this, we boosted the budget for roads from Shs398 billion in 2005/06 to Shs3,442 billion in 2015/16.

We are delivering on infrastructure. By building Karuma, Isimba and a number of small mini-hydros, our generation capacity will, by 2020, stand at 1,974 megawatts compared to 60megawatts in 1986. With Ayago power project, our generation capacity will go to 4,356megawatts by 2035.
Our petroleum plan is to build a 60,000-barrel per day refinery, expandable to 120,000 barrels every day. Apart from getting our own petroleum, diesel and kerosene for aviation fuel, the residuals will feed the petro-chemical industries to produce plastics, fertilizers and pharmaceuticals.

Some of the oil will be exported through the pipeline. Even if we are to sell only 120,000 barrels per day, according to a price of $60 per barrel, that will give Uganda an additional income of about $3 billion. This money will be dedicated to infrastructure, science innovation and some of the high-level science education institutions.

On education, about 11 million Ugandans are now in school – primary, secondary, tertiary and university. The literacy rate has risen from 43 per cent in 1986 to 75 per cent today.
We now have a total of 1,078 government secondary schools in each of the 971 sub-counties. In the next five years, we are going to have a government secondary school in all the 1,500 sub-counties of Uganda.

However, literacy and numeracy must be accompanied by technical skills. We are, therefore, going to build a technical school per constituency in addition to some professional colleges at national and regional levels.
We have increased classrooms in permanent form from 40,440 in 1986 to 104,906 today; we recently repaired 648 secondary schools and built 132 new ones. We have expanded university education from one university (Makerere) in 1986 to 32 currently, both government and private and we are expanding technical and vocational training.
Without industrialisation, the future is bleak if not doomed. For many decades, Uganda has been losing money and jobs to the outside countries.

A kilogramme of ginned cotton sells at $1.37. The same kilo turned into yarn sells at $ 3. That yarn woven into fabric sells at $5; and the final garments from the original one kilo of lint cotton, would sell at US$ 8-10.
Therefore, by selling only lint cotton (i.e. after ginning), we are losing the jobs in spinning, weaving, printing and tailoring, apart from getting only $1.37 out of a final total value of $10. The same is true of coffee, oil seeds, copper, gold, etc. This is the modern slavery that must be ended.

I am told that there has been a slow-down of tourists because of the ignorance in the West, US and Europe, where the Ebola outbreak in West Africa scared tourists from coming to Africa.
Our tourist authorities should inform all and sundry that Uganda is a world leader in combating Ebola. These factors should be put out clearly by those concerned. The other services such as banking, insurance, the professional services are developing well. The sector is growing at 5.3% per annum.

Regional market
With support of the EAC and Comesa, we have created a market of 150 million in the EAC and 400 million in Comesa.
The surplus of our milk production (2 billion litres while the consumption in Uganda is only 800 million litres) or maize (4 million tonnes while consumption in Uganda is only 1 million tonnes), is being absorbed in the region.
Uganda is endowed for agriculture, but strangely many families engaged in farming have been living in poverty because of ignorance, mainly complicated by poor leadership.
On land fragmentation, I, again, advise Ugandans to stop dividing the land and the wealth as a consequence of inheritance and only divide the net income from it and the wealth (after removing costs) among the beneficiaries.

As we wake up to the importance of commercial agriculture, we shall discover the need for irrigation. Where will the water for irrigation come from if we have dried the swamps? This is what we discovered in Kabale with the apple grower in Rukiga County. The swamps can be used economically by the people that are near them but in an eco-friendly way such as fish farming which can be done on the periphery of the swamps. Fish farming is much more profitable than the other forms of agriculture and yet we can preserve the swamp and the water.
Value addition is very crucial as already pointed out under industrialisation. Through research, we have already developed improved seeds and breeding stock.

The towns and trading centres with piped water are 1,100 with a combined population of 8.2 million people. By this systematic method, we are going to cover everybody in Uganda by supplying them with safe-water in the next 10 years. Uganda, however, must also move from rain-fed agriculture to irrigation agriculture.
The use of fertilizers in Uganda is very low. The use of fertilizers in the USA is 132 kgs per hectare; in the EU, it is 150 kgs per ha; in India it is 157 kgs per ha; in China, it is 364 kgs per ha; in Latin America (Brazil), it is 175 kgs per ha. However, in Uganda, it is 2.5 kgs per ha.

Fortunately, we are building our own fertilizer industry for phosphates at Sukuru hills. Our oil and gas in Mwitanzigye will give us the nitrogen. We only need to get the potassium from southwestern Uganda-Katwe area to complete the circle of NPK (Nitrogen, phosphorous and potassium).

Conclusion
If we love one another, celebrate our diversity, resist division and stay united, we will achieve greatness. Let us all join hands and declare the Year 2016 to be our year of prosperity.
I wish you a happy and prosperous New Year.