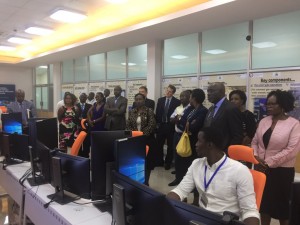 TMEA Board members had a chance to see how RECTs works before the official unveiling.

“The partnership with Kenya and Rwanda helps us monitor goods from end-to-end, easing cargo handling, improving revenue collection and reducing diversion of un-taxed goods into the market,” Doris Akol, the Commissioner General of the Uganda Revenue Authority (URA) said at the launch.

She said, “It will lead to improved fair trade as goods that have not been taxed will not be diverted to distort the market. This will benefit our traders and assure potential investors of a level playing field in our region.”

Funding for the project came from the British government. DfID, the UK international aid agency,  gave a $4.4 million grant through TradeMark East Africa (TMEA), the main consultant on strengthening regional integration in the East African Community.

The new system will enable transporters to reduce their transit costs and increase the productivity of their fleet. Kenya, Rwanda and Uganda can now seal loopholes that have led to revenue loss because of diversion of un-taxed goods into the open market. RECTs will eliminate the need for physical escort and monitoring of sensitive cargo, such as batteries, fuel and cigarettes.

DfID said it is proud to be partnering with the Uganda government and with key partners including TMEA, to reduce Uganda’s barriers to trade with the rest of the world.

Frank Matsaert, the TMEA CEO said, “Transit trade is an important element of any economy and we are glad to be the catalyst of this partnership. RECTs is one of the many innovations that TradeMark is supporting and which is geared towards easing and improving local and international trade in East Africa.”

He said, “RECTs efficiency will ingrain fair terms of trade by creating a level playing field for both importers and local industries as it helps in eliminating diversion of cargo,”

TMEA Uganda Country Director Moses Sabiiti said,“The RECTs is building on the excellent results delivered by the first phase of the Electronic Cargo Tracking System in Uganda, which reduced transit days from an average of six days (in December 2013) to 1.5 days for truckers moving from Busia to Elegu (the border with South Sudan.)