July 6—Tanzania’s Precision Air has resumed flights to Uganda, a move that has pleased the Uganda […]

July 6—Tanzania’s Precision Air has resumed flights to Uganda, a move that has pleased the Uganda Investment Authority (UIA) because it will see Ugandan travelers avoid the inconveniences associated with finding connecting flights to Tanzania. Kenya Airways has a 41% stake in the airline. 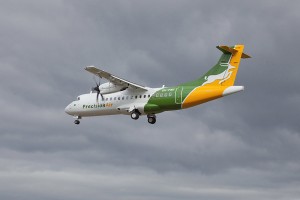 Precision halted flights to Entebbe in 2013. “As an investment facilitation agency, connectivity is of utmost importance to UIA. Uganda is now a 90 minute flight from Tanzania,” Jolly K. Kaguhangire, the UIA Executive Director said in a statement early this week.

Precision Air was incorporated in Tanzania in January 1991 as a private airline and started operations in 1993. At first, it operated as a private charter air transport company but in November 1993 changed to offering scheduled services to serve the growing tourist market. In 2006, Precision Air became the first Tanzanian airline to pass the IATA Operational Safety Audit. Its most recent certificate will expire 22 September 2018. In April 2011, the airline became a public company

“Europe and India, for example, are six hours away, UAE, five hours and South America 10 hours. The furthest point on the continent is six hours. This strategic location provides quick connections and access to surrounding markets,” said the official.

In a letter addressed to the Group Managing Director and CEO of Precision Air, Sauda Rajab, Kaguhangire assured Precision management of the UIA’s “unwavering support and commitment with their operations in Uganda.”

UIA pledged to continue with efforts to improve the investment climate, grow investor confidence as well as highlight the opportunities Uganda offers to investors in order to make Uganda a preferred investment destination