March 29, 2018—Tanzanian and Ugandan firms want to exploit all available opportunities for local content in […]

March 29, 2018—Tanzanian and Ugandan firms want to exploit all available opportunities for local content in the proposed $3.5 billion East African Pipeline Project (EAPP) that will ferry the commodity from western Uganda to Tanga port in Tanzania. 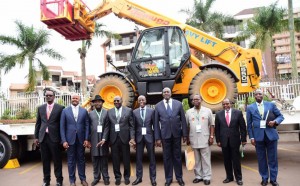 Top officials fro ATOGS and AGOS along with invited guests line up to mark the occasion for closer cooperation.

The heated pipeline will run about 1450 kilometres and the project has been officially endorsed and launched by President John Magufuli and his Ugandan counterpart,  President Yoweri Museveni at both the planned terminals.

There is an estimated 1.5 billion to two billion barrels of  recoverable crude in Uganda’s Albertine Region being mainly developed for commercial sales by Total E&P and China National Offshore Oil Corporation (Uganda) Limited.

“There is an unprecedented level of political will that this project should be done in a manner that benefits our people both in Uganda and Tanzania,” Ambassador  Ombeni Safue who chairs the Association of Tanzania Oil and Gas Service Providers (ATOGS) said during a local content dialogue in Kampala during mid-week.

Some $10 billion to $15 billion is expected to be invested in getting Uganda’s oil and gas sector up and running during the next 10 years which is the major attraction for domestic companies. They want a share of the contracts.  Basically, local content is the development of local skills, oil and gas technology transfer and use of local manpower and local manufacturing. However there have been concerns that the bulk of the pipeline will be in Tanzania which gives them an advantage over interested Ugandan companies.

The dialogue was also attended by Ernest Nwapa, the Executive Secretary of the Nigerian Content Development Monitoring Board (NCDMB) and top officials from the Association of Uganda Oil and Gas Suppliers (AUGOS). Amb. Safue said, “As two associations, we will try to bring the two sides together; what the government wants to achieve and what our people are entitled to in terms of accessing the value of the resource.”

Peter Lokeris, the State Minister for Minerals said, “We decided that we should organise ourselves to get what we call local content. But to achieve local content in Uganda’s oil sector, it will require combined efforts of all companies like banks, private oil companies and environmentalists.”

He advised companies to participate and partner with the people in Uganda and Tanzania so as they can also benefit from the projects so as it is not seen as a ‘White Elephant’.

Nwapa said, “From the discussions I have witnessed, I can confirm that these two countries (Uganda and Tanzania) are well prepared, because they have already witnessed where other countries failed. I am very impressed because what I have seen and heard is far ahead than where we were at this very stage way back in Nigeria and I hope that next time when I come here, we will be exporting Ugandan petroleum.”