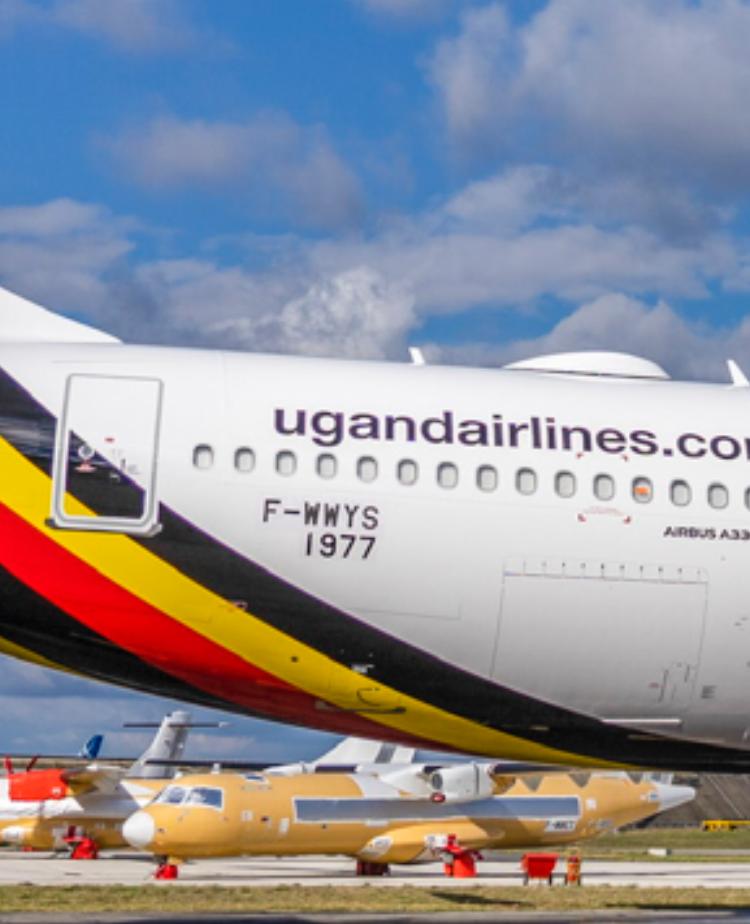 Did  European aircraft manufacturer Airbus, breach safety procedures and its own standards, when it accepted a […]

Did  European aircraft manufacturer Airbus, breach safety procedures and its own standards, when it accepted a pilot with more than 500 hours to train as a first officer on the A330-800 neo? Did the Uganda Civil Aviation Authority breach pilot lincensing regulations when it issued a license to a pilot accused of training on the large jet without minimum qualifications? Is it wrong for a section manager to get involved in conducting due diligence on bidders seeking to provide a service under his department?

Those are some of the questions the panels set to hear the cases against suspended Uganda Airlines officials will have to answer as they move to unravel a litany of accusations against them.

In a sensational letter that put the airline in the spotlight earlier this month, President Museveni was reported to have ordered the sacking and criminal prosecution of some senior managers and junior officers at the airline. Among others, officials were accused of compromising safety by rostering unqualified pilots to operate commercial flights and fast-tracking the upgrading of others without requisite flying hours, to heavier category aircraft.

Board and senior management are accused of engaging in corrupt practices such exchanging jobs for money, failing the certification of the Airbus A330 fleet, inflating prices and perpetuating corruption in procurement.

Other officers were accused of engaging in procurement fraud, soliciting for bribes to recruit workers in different departments and failing the airlines self-handling project.

In response however, some of the defence submissions that 256BN has so far seen, paint a picture of intrigue, improvised and in some cases, misplaced charges. In one case, an accused officer reports pressure on peers who were being promised USD 10,000 to testify against him. Some of the charges raised against individual officers, also raise questions about the competence of the investigating team and the depth of their investigations, beyond mere hearsay.

For instance, one manager is accused alongside others of soliciting bribes in the recruitment of staff and procurement of ground handling services in Juba. The investigators allege the manager in question and his team awarded the ground handling contract for Juba to a briefcase company in exchange for a USD 15,000 bribe.  He is also accused of negotiating ground handling rates which included VAT in its invoices yet such a tax head did not exist in South Sudan.

While the said manager concedes to being part of the delegation that travelled to Juba, he contends that his role was only limited to technical evaluation of the bidders’ capabilities and did not at any one time award a contract, since procurement was outside his remit.

He also denies getting involved in the recruitment process for his department because the duty managers in his department were recruited before he joined the airline.

Two firms – Uganda owned DAS Handling Juba and ZAS Juba were evaluated to offer ground services across a set of parameters in which with ZAS Juba emerged on top.

According to contrary information, ZAS, which the investigators describe as a briefcase company is an established ground handler in South Sudan with better equipment and better financial resources.

The ground handling contract was awarded to ZAS Juba at a rate of USD400 per turnaround for the CRJ-900 against a competing offer by DAS Juba which had quoted USD460. The rate negotiations and due diligence on the companies fell within his responsibilities as the ground handling manager.

Besides the lower quote, ZAS had insurance cover for ramp damage to the tune of USD5million against only USD750,000 for DAS. That means in case the aircraft suffered damage in excess of USD 750,000 while on the ramp in Juba, the airline would have to dip into its own financial resources to meet the cost of repairs beyond USD750,000.

The manager who is challenging his accusers to prove the allegation of bribery, also argues that his role stopped at negotiating the specific handling rate, while the finance department would handle any tax related aspects. Interestingly, the current management has not made any effort to change cancel the contracts investigators claim were corruptly awarded.

Another manager faces six counts, including alleged failure to manage and use the airlines’ flight data system to identify potential hazards; involving himself in areas outside his core functions, fast tracking pilots that did not meet minimum qualifications, soliciting bribes from bidders and prospective employees and smuggling candidates that were not short-listed into interviews for cabin crew.

However, the manager contends that recruitment of pilots was outside his job description and remains the responsibility of the Chief Pilot and the HR department. Records also show that Uganda Airlines only hires First Officers with a minimum of 500 flying hours, while Airbus accepts pilots with a commercial pilots’ licence to train as first officers on its aircraft. Such pilots would have typically logged just 200-250 hours of flying time to qualify for training on the A330. That contradicts the claim that pilots who lacked minimum time were favored to up-gauge to the the widebody.

That particular claim by the investigators potentially implicates Airbus and the Uganda Civil Aviation Authority and they might have to appear as witnesses during the hearings.

According to records, the pilot in question, was a First Officer on the CRJ fleet before he was selected to upgrade to the larger A330. He had logged a total time of 1000 hours at the time he was nominated to train on the A330. He successfully completed his training and was only waiting.

Uganda Airlines needs 16 crew sets for its two A330-800 neo aircraft. In line with promoting Ugandans and saving on the cost of hiring expatriate pilots, the airline hired whatever Ugandans that were already qualified on the type as Captains while young Ugandan pilots were selected to train as First Officers. Expatriates were hired to act as training Captains to transfer knowledge and build the capacity of Ugandans.

The manager attributes his involvement in different activities in the airline because of his crosscutting role as safety manager, which the investigators had described as nosing into areas that did not concern him.

Ironically, lack of minimum qualifications is not cited in the charges brought against the pilot whose training was allegedly fast-tracked. Instead, the pilot who was on the task force that set up the airline and was the contracts committee chairman during the interim management, is accused of presiding over “a number of unscrupulous procurements without proper documentations.” He is alleged to have in once instance signed as a contracts committee chairman and procurement manager on the contract for procurement of clearing and forwarding agencies and introduction of an unsolicited bid with a lower quote in the procurement. He is also accused of bidder collusion and awarding a contract without clearance from the Solicitor General.

The accused officer cites waivers from the typical government procurement procedures that were granted to the airline given the unique nature of its operations. Equally, the solicitor general is only invited to scrutinise contracts after evaluation and award. In one instance, the officer is even faulted for negotiating a contract from a bid price of Ushs 425 million down to Ushs372 million.

Captain Alex Joram Kakooza, a pilot with a cumulative experience of 5800 flying hours on various aircraft types is accused of putting passenger lives at risk when he allegedly continued to fly passengers on the CRJ after failing to qualify for the type during company sponsored simulator training on two occasions. It is further alleged that he then subsequently sponsored himself for a third shot at the CRJ simulator.

The allegation which formed part of President Museveni’s letter ordering prosecution of the officers generated a lot of social media commentary that cast Uganda Airlines in a negative light.

Kakooza, who is qualified as a captain and trainer on the Embraer Brasilia 120,  and First Officer on the McDonnel MD-80 however, denies ever failing any simulator session, sponsoring his own training or flying passengers on Uganda Airlines before completing training.

According to available records, Kakooza who was also on the task force that set up the airline, was offered a conditional contract when he opted for flying duties, instead of a management role for which he was qualified, as the airline prepared to launch services in mid-2019.

Alongside a couple of other pilot trainees, Bombardier booked a CRJ-900 simulator type-rating training slot for him at CAE Phoenix in the United States during early 2019. He was however forced to defer completion and his simulator check rides, after encountering severe stress due to marital problems that bordered on divorce. After a discussion with his trainers’, he was allowed a break. But just before he could resume training, he was forced to return to Uganda, because his visa had only a few hours to expiry.

When time to return to the US came, the facility in Phoenix was out of training slots. Bombardier then transferred Kakooza’s training to an alternative facility operated by CAE in Toronto, Canada. He subsequently completed the simulator sessions successfully before returning to Uganda where he went through the airlines own rigorous acceptance checks.

Before he could be allowed to fly passengers, Kakooza like other pilots, underwent rigorous line training checks on the CRJ-900 by the CAA and Uganda Airlines own expatriate training captains, before he was assigned flying duties later in 2020.

256BN has sought and been granted permission to look at Captain Kakooza’s line training records. Performance is scored on a scale of 1-5 with 1 considered very poor and 2 poor. Across several sectors Kakooza flew under supervision by Base Training Captain Kenneth Fisher, a US Federal Aviation Administration licensed trainer, the trainee consistently scored between 3-5. Fisher only advised Kakooza to plan his descent speed earlier during a night flying session on November 10,2020 on UR204/205 to and from Nairobi. He scored 3 during on that particular drill while he scored 4 on other aspects including safety and airmanship, command ability potential, general procedural flying, and landing. His overall score for the entire flight also came in at 4.

Fisher’s assessments were confirmed by Captain Okoth Clive who took Kakooza through various scenario’s including Crew Incapacitation – where the First Officer has to take control of the airplane after the captain becomes incapacitated. In one session on November 29, Kakooza scores a 5 in 17 out of the 21 functions assessed during a check ride.

A claim which caught the attention of the public, was the allegation by investigators that Kakooza failed two simulator sessions and then sponsored his own remedial training later.

During a simulator check examination on March 4, 2020, Kakooza failed a drill that simulated engine failure at take off-speed which is abbreviated as V1. He also failed a a drill in single engine non-precision approaches.

Those were only 2 manouvres failed out of 77 drills for which he was examined during that first attempt. The failures are not fatal and candidates are allowed corrective attempts later. Simulator exercises are simply passed or failed.  Kakooza repeated the manouvres 24 hours later, and Captain Ferreira, signed off his examination with a pass.

It is apparently these two drills which the investigators twisted to appear like total failure of simulator classes.

Ferreira’s assessment would be validated nearly a year later, when Kakooza was sent for recurrent training at Lufthansa Aviation Training School in Berlin, Germany in in February this year. He was examined by Captain Andre Etzholz who gave him a score of 93pc in ground school. He scored grade G (good) across the 79 manouvres for which he was checked.