November 13—Uganda National Bureau of Statistics (UBOS) has announced plans to carry out a national agricultural census which is expected to be conducted between 2019 and 2020. 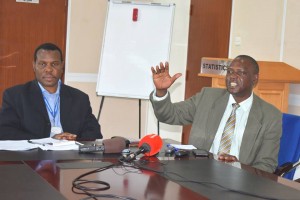 Okello and Nabongo brief the media on the proposed census that comes a decade after the last one was held in financial year 2008/9.

“Most of the data available about the sector is from the previous census which was carried out many years back. The general public need updated data about the sector and that is why UBOS intend to carry out a new survey about the sector such that the public gets updated information,” Godfrey Nabongo, the Head of Communications at UBOS said during a news conference.

Uganda last carried out an agriculture census in during financial year 2008/2009.  Consequently, both the government and the private sector have been depending on data collected almost a decade old.

The statisticians say depending on this information can mislead when it comes to planning for the agriculture sector.

Patrick Okello the Director Agriculture  and Environment Statistics at UBOS said they need updated information if the government is to properly plan for the sector in the coming ten years.

“Updated Agriculture statistics is vital for both central and local governments. Without data, the government cannot plan for the sector which is considered the backbone of our economy. The gathered information will aid government to analyses the sector,” he said.

The proposed census will cover three parameters, the crop sector, livestock and aquaculture. When asked how much the census will cost government, Nabongo said UBOS has not yet finalised the budget.

“The budget is not yet out but the government and its development partners are willing to finance the exercise as they have been doing in other censuses,” he said.

Apart from the three parameters, the agricultural census will also look at gender issues especially on access to land by women, application of technology in the agriculture sector and access to markets by farmers.