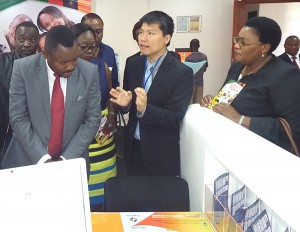 Topstar’s Leo Liao hosts Zambian legislators during an August 2017 visit during which he briefed them on the company’s objectives.

January 18—A joint venture between the Zambian state broadcaster and China’s Star Times has drawn the curiosity of the country’s financial ombudsman due to the oddity of borrowing $200 million without a repayment plan and now finding themselves defaulting on the first interest payment to China Eximbank.

According media reports the Auditor General says the government acquired a $232,181,138.85 loan from China Eximbank through Star Times without a repayment plan.

Essentially TopStar was given the job by the government to move the entire country from analogue to digital television reception, but which also gave an opportunity for StarTimes to market its products. StarTimes offers digital terrestrial television and satellite television services to subscribers.

For the first 25 years of the venture, ZNBC was to own 40% shareholding in the company while Star Times was to have 60%.  After the 25 years, the shareholding would be revised such that ZNBC retains 40%, but Star Times will drop to 30% public institutions take up 20% while the general public will have the remaining 10%

However the AG queried how the venture could have gone ahead after ZNBC failed to pay up $40,000 as its initial stake in Topstar.

‘Article 4.1 stated that ZNBC was going to pay US$40,000 as initial capital contribution to Topstar. The Board of ZNBC observed at their meeting of 12th May 2016 that ZNBC did not have such money to contribute towards the venture. As at time of audit in September 2017, there was no evidence that the amount had been settled,” reads part of the report.

In his report, the AG states, ‘On 26th December 2016, the Government of the Republic of Zambia signed a Preferential Buyer Credit Loan Agreement with China Eximbank under which the bank was to avail to the government a credit facility of $232,181,138.85. The loan proceeds were to be used in the supply, delivery, installing and commissioning of a National Digital Terrestrial Television Broadcasting System in Zambia under Phase II and Phase III of the project’.

The AG said best practice requires that prior to acquiring a loan, an organisation should have a strategy for repayment of the loan which among others should stipulate the time-frame for receiving loan proceeds, their application, expected cash inflows and outflows, net present values, rates of return, payback period and market viability of the expected revenue sources.

‘It was, however, observed that there was no such strategy regarding the loan that ZNBC acquired. In this regard, it was further observed that while the on-lending agreement required that the ZNBC and Topstar should make the first payment of interest on 15th July, 2017 amounting to $2,321,811.39, the project works were still ongoing, resulting in failure to honour the first interest payment.”

Nor has ZNBC and Topstar opened two Escrow bank accounts meant for collecting and transferring revenue generated under the project to be used for loan repayments, as stipulated in the agreement with China Eximbank.

In sum, the ZNBC’s administrative costs were higher than the money the institution generated.