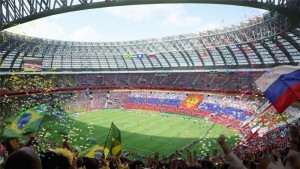 The company has been awarded the broadcasting rights to 42 countries and territories in Africa except South Africa.

April 5–Chinese owned international pay-TV operator Startimes, has acquired media rights to broadcast the  2018 FIFA World Cup in Africa. Russia is hosting the event which FIFA, the world’s governing body, considers the gem of all their competitions.

Startimes has been awarded pay-TV transmission rights for exploitation in all 42 territories of sub-Saharan Africa except South Africa with regard to the 2018 FIFA World Cup.

“We are so glad to offer the best football matches to our subscribers in Africa with having secured the broadcasting rights to the 2018 FIFA World Cup and all the other 2017-2018 FIFA events,” Michael Dearham, Startimes Vice-President and Managing Director of Media Division said.

StarTimes was started in 1988 and was quick to ride digital technology as a basis to provide entertainment across several countries around the world, including Uganda.

FIFA Chief Commercial Officer Philippe Le Floc’h said, We are delighted to work with our appointed broadcast partners in the sub-Saharan region to allow millions of fans to enjoy each of FIFA’s various events, across a multitude of platforms.”

Startimes started developing its African markets in 2002, and was issued the first digital TV operator license by Rwanda in 2007.