Home » U » Standards bureau to spend $6m on food lab 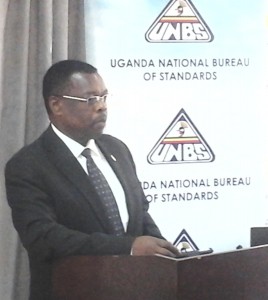 Dr. Manyindo said construction will take about 18 months and nearly half of the money is from UNBS’ own resources.

January 24—The Uganda National Bureau of Standards (UNBS) has plans to build a modern food testing laboratory to check distribution and sale of harmful foodstuffs in the country as well standardise Ugandan food exports.

“The construction, we expect to start very soon after signing the contract with the contractor because we have finalised with the procurement process. We hope that in the period of 18 months the facility will be in place,” Dr Ben Manyindo, UNBS executive director told a news conference in mid-week.

He said construction of the UGX 22 billion (nearly $6 million) lab is part of UNBS master plan of having modern infrastructure to enable it carry out its mandatory tasks. Having adequate analytical and calibration laboratories is vital for UNBS to remain effective and relevant. However shortage of funds has made this often difficult.

A major role of UNBS is to enhance the competitiveness of Uganda’s products, to facilitate trade as well as to protect the consumers against dangerous, fake and substandard goods in the marketplace.

Dr. Manyindo said there is a high demand for food related items, local regionally and internationally, but for Uganda to penetrate new markets, these items must meet the required standards.

He said part of the money or UGX 8.5 billion will come from UNBS and the rest from the central government. The laboratory will be constructed in Bweyogerere, about 12 kilometres outside Kampala.

UNBS also intends to decentralise their services by opening up regional testing centres across the country. These  will be opened up in Mbale to cater for the eastern part of the country, Mbarara for west and Gulu centre to offer services to the northern region.

“Centralising our services will enable our customers to access the UNBS services near their business this reduces the time taken during testing and certifying of the products instead of depending on the Kampala testing centres,” he said.