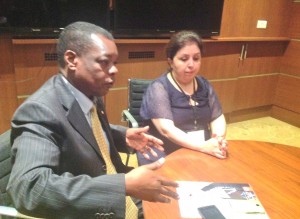 Manyindo said UNBS has been too taken up by goods, yet the services sector had risen in importance, but ISO’s Alkhammash (right) stressed that there must be consensus in evolving relevant standards.

September 6—The services sector has been targeted for closer attention by the Uganda National Bureau of Standards (UNBS) and especially against a backdrop of the growing importance of tourism which currently earns the country a billion US dollars annually.

“We are going to add efforts in the tourism and hospitality sectors. These are sectors that determine highly on how many investors will decide to stay longer or invest in Uganda. We want to be sure that the people in these sectors have high standards. The same with the oil sector– we want to set standards for people that will be working in these sectors,” Ben Manyindo, the UNBS Executive Director said this week.

He was speaking at the opening of an International Standards Organisation (ISO) regional training course on managing national standards, development projects and programs for 21 African countries that is being held in Kampala.  The Geneva-based ISO, sets a wide range standards across the world that millions of companies and institutions strive for in order to be more competitive or compliant in the international market place.

Manyindo said UNBS has been concentrating excessively on the standards of goods yet services are also an important sector as far as the economy. Manyindo said UNBS wants to improve Uganda’s international ranking in the services sector, which has long sped pass manufacturing and industry as the leading driver of economic growth due to new technological advances and particularly in ICT.

The training is being carried out by experts from ISO intended to help African countries to improve the application of the project management approach to the standards development prose and provide efficient and effective services to standard developers.

Manyindo said African countries that trade with each other need to harmonize their standards so that business is made easier. “Africa by now should be one village as far as trading is concerned. We will only be able to harmonize trading systems if our standards are the same. That way, our goods will not be rejected on the basis of poor standards,” he said

He thanked ISO for organizing the training and hoped that at the end of the four days, all participates will be able to improve service delivery in their countries.

Nesreen Alkhammash, the ISO Program Manager said, for these standards to be successfully followed, there is need to engage the different sectors that are affected by the standards so that there is a consensus between the authority and the private sector.

“The systems developed must be addressing the needs and interests of the stakeholders. For example, it must be timely, accessible and affordable. If the stakeholders feel that the system is favourable to them, there are big chances that they will apply them,” she said.

“That is why it is important for UNBS and the other standard bodies in Africa to always seek out the opinion of these stakeholders before they decide on the project,” she said.