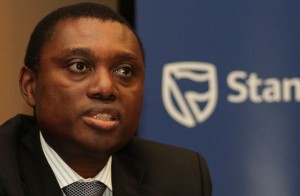 Tshabalala said the group will continue to be involved in market-leading client experiences.

March 3–Total earnings for South African financial giant, Standard Bank Group, went up by 4% to 23,009 million, (about $1.7 billion) for the year ending December 2016, but return on equity slipped slightly from 15.6% in 2015 to 15.3% as the Group looked back on a ‘tumultuous’ year. The group is based in Johannesburg, but with subsidiaries spread across Africa.

Headline earnings per share at 1440 cents means a 4% upward hike compared to the previous year and total dividends per share were at 780 cents per share representing a 16% rise.

Shareholders however remain upbeat with figures showing that the group continued to grow its businesses both in South Africa and across the continent, trading mainly as the Stanbic franchise. This comes despite the elevated levels of macro, political and policy uncertainty experienced in many of the markets in which the group operates.

Releasing results, the group said 2016 was a tumultuous year. “Globally, the ambiguity in the run-up to the UK’s “Brexit” vote and the US election, as well as the contrarian outcomes, drove uncertainty and volatility. During the year, China’s policy stimulus continued and growth stabilised, providing some support to commodity prices, while OPEC’s decision to trim output helped to lift oil prices,’ the group statement reads in part.

However the group expects global trade activity to pick up on the back of policy stimulus and a gradual normalisation of large economies, such as Brazil and Russia. Nevertheless, uncertainty surrounding US policy direction under the new administration, Brexit negotiations and the broader European macro outlook may pose downside risks to global growth prospects.

Sim Tshabalala, the Standard Bank Group joint Chief Executive said, “With these dynamics in mind, we look to our clients, to the challenges and opportunities they may face, and seek ways to partner with them on their journeys in 2017 and beyond. As we focus on delivering market-leading client experiences, we continue to invest in our client-facing digital capabilities to enable our clients to transact independently and safely anytime anywhere.”

In sub-Saharan Africa, widespread drought in east, central and southern Africa continued, which placed strain on food supply and drove inflation. Oil-export reliant countries remained constrained on the back of low prices, and many countries tightened monetary policy in an attempt to control inflation. Despite these headwinds, the more diversified oil-importing east African countries continued to offer better macro prospects, attract investment and outperform. 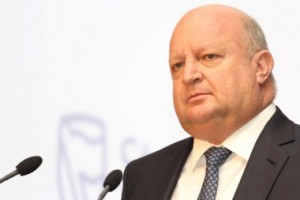 Kruger is promising a future return on equity of between 15%  and 18%.

Credit impairment charges were 3% higher than in 2015. Operating expenses increased by 11%, of which the Japan fraud incident, the increase in permanent employees to comply with legislation, and higher information technology systems related amortisation contributed 2% to the operating expenses growth.

Corporate and Investment Banking earnings grew by 16% to R10 558 million. Total income grew by 12% to R35 249 million (about $2,6 billion), with client revenue growing by 10%. CIB’s focus on multinational corporates is paying dividends and revenue from these customers contributed approximately 60% to total revenues. NII increased 25%, while diligent cost management delivered cost growth of 7% and strong positive JAWs of 5%. CIB’s continued disciplined approach to capital allocation resulted in ROE improving to 20.0% from 18.0% in the prior year.

Ben Kruger, the Standard Bank Group joint Chief Executive said, “As we look to the year ahead, we remain steadfast in our commitment to doing the right business the right way. In this context, we continue to embed a culture of responsible business practices.”

“We remain committed to delivering through-the-cycle headline earnings growth and ROE within our target range of 15% – 18% over the medium term. In order to do so, we recognise the need to balance prudent capital management with appropriate return-based resource allocation and leverage,” he said.