Stanbic, ICBC toast to a decade of partnership

May 18, 2018 in Business, Companies, Financial Services by Editor 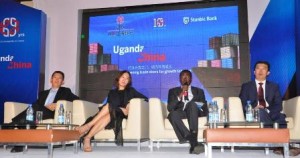 May 18-2017-Stanbic Bank and the Industrial and Commercial Bank of China (ICBC) on Thursday used the backdrop of the third edition of the China Uganda Business Forum, to celebrate ten years of a partnership that has facilitated a tenfold increase in Chinese business with the continent.

ICBC, the world’s biggest bank, acquired a 20.1pc stake in Stanbic parent the Standard Bank Group in 2008, making it the single largest shareholder in the bank.

Delivering opening remarks at the forum, Stanbic Uganda Chief Executive Mr Patrick Mweheire said the partnership between the two financial giants was a prime example of how “strategic cooperation can deliver both tangible business and social results when likeminded partners come together.”

“China is Africa’s most important trading partner having generated over 300 billion dollars’ worth of business in 2017 alone. This figure has grown nearly tenfold over the past decade and is one of the main reasons the continent has witnessed such a rapid economic growth over the period. Our objective in hosting this forum is to provide a strategic platform that promotes constructive dialogue between like-minded Ugandan and Chinese businesses so they can tap into the multiple opportunities the relationship between our two banks offers,” he aaded.

Ms. Zhao Xiufeng, the Economic and Commercial Counsellor at the Chinese embassy in Uganda hailed the relationship between the two partners. “In the past 10 years, the two banks have been committed to serving China-Africa economic and trade cooperation and working hard to build a bridge for China-Africa financial cooperation. On the one hand, ICBC’s head office directly provides financing to Chinese companies in Africa; while on the other, Standard Bank provides Chinese companies with daily financial services across Africa. This cooperation model has made a full contribution to the various types of financial needs of Chinese customers through the promotion of China-Africa economic, trade, and investment exchanges,” she said.

Talking about some of the investments made by ICBC across Africa, Mr Sun Gang, ICBC’s Deputy Chief Executive in the Africa Representative Office revealed that ICBC had so far supported 30 large scale projects- worth over USD 33 billion across the continent. “These include the Kaka hydropower project in Angola valued at USD 4.5 billion. In addition, we have been able to provide Ugandan and Chinese clients alike with different financial products and services that have made it easier for them to do business. One such product is the Renminbi (RMB) account which has allowed businesses in China and Uganda to save money by not suffering exchange rate losses.”

Presenting a strategic paper titled, “China, the trade war and Forum on Africa-China Cooperation (FOCAC) and the implications it may have on East African manufacturing.” Jeremy Stevens an Economist for Standard Bank Group based in Beijing predicted that, China will continue being keen to strengthen ties with Africa, noting however that more focus would be towards investments in manufacturing where about 1/5th of Chinese investment in the continent are currently. “Chinese firms are creating the most jobs in Africa than any other large commercial partner. The scope for more Chinese partnership is obvious given that it has been most successful in linking Africa and East Africa to global supply chains.”

Closing the conference Wayne Cook, Stanbic Uganda’s Head of Business Banking thanked the participants for attending the forum which he said offered rich insights into the current status and future direction of the socio economic relationship between Africa and China