September 12, 2018—Standard Chartered Bank Uganda wants to nurture self-initiative among the country’s young disadvanatged women by helping to pay for their training in setting up business start-ups. 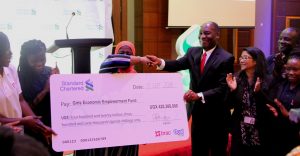 Saltson (fourth right) said programmes like the one being run by BRAC have multiple economic benefits.

Early this week, StanChart Uganda handed over UGX420 million (about $110,000) to BRAC Uganda who are involved in the Goal Project that provides financial, social and life skills especially vulnerable adolescent girls across the country.

“When you educate a woman, you educate the whole family and the whole nation. We are proud to be part of a project that brings positive change into lives of thousands of girls and their families,” Albert Saltson, the bank’s CEO said and highlighted the multiple economic benefits that come with such a project.

BRAC was founded in Bangladesh, (same country where the Grameen Bank was started) and is the largest social enterprise in the world. The Uganda office has been operating since 2006.

The money will pay for supporting about 250 girls in business start-ups and the up-skilling of over 3,000 entrepreneurs. Gender, labour and social development minister, Janat Mukwaya said there was need for organisations, both public and private, to get involved in empowering girls and map out areas where they can help.

“There is a lot of good work that Non Governmental Organisations and even Government are doing to empower the youth especially girls. However the results are not visible on the streets as more people are crying of unemployment,” she said.

She also asked organisations not to ignore the boy child because this may create a bigger gender and social problem in future. Saltson said, “In Uganda, with BRAC as our major partner, we have reached over 23,000 girls in five modules of training. We are therefore uniquely positioned to help facilitate economic equality to ensure equal economic and education access.”