February 22—Herman Kasekende, until recently Chief Executive Officer, Standard Chartered Bank Uganda, has taken up the same position at StanChart in Zambia. His replacement in Kampala is Albert Saltson who has been heading things in The Gambia. 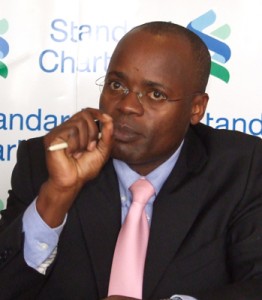 Kasekende is credited with building a resilient and sustainable business for StanChart in Uganda.

“For the past four years, Herman has been instrumental in building a resilient and sustainable business in Uganda,” Dr. Robin Kibuka, the StanChart Uganda board chairman said. Kasekende joined the bank in 1998 and has served in various senior capacities within the banking group.

Dr. Kibuka said, “He has provided strong leadership, most notable in 2016 with a recovery in profits that should be sustained by the realignment of the bank’s retail and commercial structures to a more client-centric model in line with the bank’s international strategy.”

Kasekende is credited with turning around the business by reducing the portfolio of non-performing loans, exploring new revenue opportunities, maximising efficiencies while maintaining a balance sheet that is highly liquid and well capitalised. The bank has also achieved a staff gender ratio of 53:47 (women to men) with women in leadership positions at 43%.

He led the launch of the bank’s mobile application, revamped the online banking platform, S2BX, Straight2Bank mobile wallet and the replacement of over 20 ATMs.

Prior to becoming Chief Executive Officer in The Gambia, Albert served as CEO for Standard Chartered Bank Sierra Leone. He has led the business in The Gambia to achieve outstanding financial performance in the past year.