Stanbic Uganda holds a firm mid-year amid pressures on yield 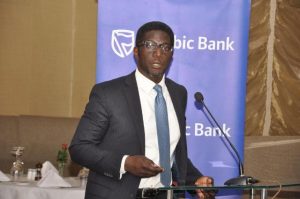 August 8, 2018 –Stanbic’s Ugandan unit defied declining yields across the industry to power to UGX 96.1 billion in profits for H1 2018. The result was driven by strong momentum in the deposit book which expanded 16pc and a loan book that grew by 13pc during the same period.

Year on year, mid-year net profit expanded from UGX 95.4 billion for the comparable period in 2017 to UGX 96.1 billion in 2018. Most of the growth came during the second quarter, mirroring a rebound in economic growth that has been consistent for the past three quarters.

Chief executive Patrick Mweheire attributed the marginal growth to a rapid retreat in the Central Bank Rate which had pushed Stanbic’s prime to 17pc. He attributed the solid performance to a carefully managed business strategy.

“The bank has posted solid results over the past six months underpinned by the strength of our diversified business strategy,” Mweheire said explaining that customer deposits had grown 16.2pc year on year to UGX 3.75 trillion while total assets expanded 7.4pc to UGX 5.1 trillion.

“This has put us in a much stronger position to support major development projects and further facilitate economic growth,” he added.

Looking at the year ahead, Mweheire said he was optimistic “the economy will continue to grow due to expansionary policies of the central bank and improved private sector activity.”