August 15—Stanbic Bank Uganda (SBU) outpaced its rivals in the industry by reporting a solid first half year performance and holding onto 30% of total market share despite difficult operating conditions which however have been improving in recent months. 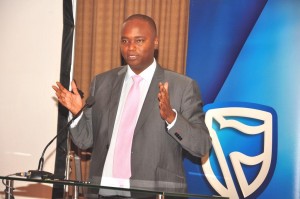 Banking sector profitability in Uganda dropped 4% Year-on-Year as at June 2017 compared to 18% growth same time last year. SBU’s profit-after-tax figure dipped to $27 million (UGX 95 billion) from the $30 million posted during the same period last year. Total income for the first half of 2017 was $87 million down from the $93 million generated between January and June in 2016.

SBU Chief Executive, Patrick Mwehiere said, “We have reported a solid performance despite a subdued economic environment due to our diversified businesses and relentless focus on the customer.”

Although lending rates have been going down in line with the Central Bank Rate (now at 10%), potential borrowers are not falling all over themselves to apply for credit and this is affecting commercial banks’ earnings. Mwehiere said 2017 will prove to be a tough year, but he is optimistic about SBU.

“Supporting Trade and Infrastructure played a key role in our performance as we grew our off–balance sheet exposure to an excess of UGX 1 trillion in support of the development of our nation.  This provided a much needed buffer from a challenging economic environment characterised by low private sector credit growth and low aggregate demand.

“We are optimistic of the second half as the downward revisions of the Central Bank Rate, four times in the first half of the year begin to stimulate borrowing and much-needed private sector credit growth necessary to jump-start the economy,” he said.

SBU reported growth in customer deposits by UGX 388 billion, the loan portfolio went up by UGX140 billion, off-balance sheet itemsup  by UGX 271 billion and registered profitability of UGX95 billion ($27 million). Referring to how the bank’s performance impacted on the wider economy Mweheire said, “Stanbic collected tax in excess of UGX 1.75 trillion on behalf of the Government of Uganda, through our large branch network. The bank and its employees on its own – contributed a total of UGX 68.3 billion for the first six months of 2017.”

Looking towards the second half of the year he said,“We are optimistic that the economy will grow faster as individual and commercial borrowers take advantage of much lower interest rates.  We have reduced our prime lending rate by 5% over the last 12 months and will continue to support our customers by introducing new products and services that make a difference.

“We will continue to invest in the communities where we operate and spend a meaningful portion of our Corporate Social Investment budget supporting Early Childhood, Primary and Secondary education initiatives,” he said.