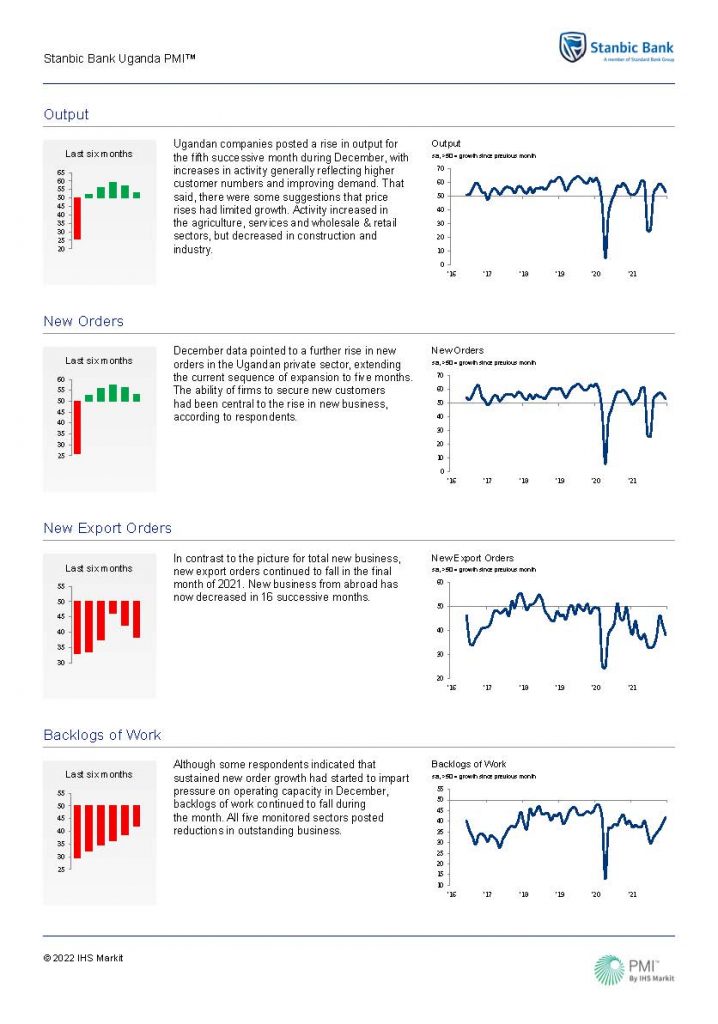 The economy saw mixed fortunes in December as economic out remained on a positive trajectory but new jobs slipped on the back of rising input costs.

Stanbic Banks’s Purchasing Managers Index PMI for the month shows an uptick in demand and output by Uganda’s private sector but that growth was not matched by a rise in new jobs.

The headline PMI fell to 51.5 in December, the lowest point since the series started in June 2016.

Ronald Muyanja, the Head of Trading at Stanbic Bank Uganda said, “Rising customer numbers amid improving demand resulted in increases in both output and new orders during December, in each case for the fifth month running.”

According to the index, activity expanded in the agriculture, services and wholesale & retail sectors, but declined in construction and industry.

In turn, firms expanded their purchasing activity again, feeding through to another rise in stocks of inputs. Firms were aided in their efforts to build inventories by shorter delivery times from suppliers.

But employment dropped in December after having risen for the first time in six months during November, some firms indicated that they had reduced staffing levels in order to limit costs.

Labour expenses aside, costs continued to rise with respondents linking higher input prices to increases in costs for cement, electricity, food, fuel and stationery. Buoyant demand enabled companies to pass on the higher input costs to customers, resulting in a fifth consecutive monthly increase in selling prices. Sentiment remained positive with 83pc of respondents anticipating a sustained business rebound during 2022.