September 19, 2017 in Communications, Companies by Editor 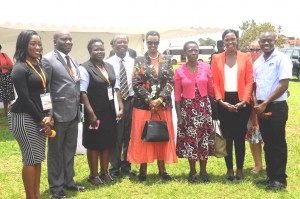 September 19—Stanbic Bank Uganda (SBU) has partnered with the organizers of the 2017 Africa Debate Championships. The event is the first of its kind in Uganda and attracts participation of schools from across the continent to share knowledge, interact and compete in a rich educational experience.

The debate is in line with the bank’s continued commitment to support and transform the lives of people through the bank’s Corporate Social Investments (CSI) programmes.

The launch was hosted recently by Mengo Senior Secondary School in Kampala and was graced by Janet Museveni the First Lady and Minister for Education and Sports.

In her remarks, Mrs. Museveni said, “African countries have succeeded in increasing enrollment of learners in the classroom. Many of our countries have introduced universal free primary and secondary education in an effort to give equal opportunity to all children. The number of university graduates is also increasing.”

She said, “However, there are skills that are not easily taught and grasped in the classroom environment, yet such skills are vital in preparing the student to compete successfully in the world beyond the classroom. Competitive debate teaches these extremely valuable skills.”

Cathy Adengo, the Stanbic Bank Corporate Head & Communications reaffirmed Stanbic’s commitment to changing lives for the better and this is the key pillar for its Corporate Social Investments in education.

She said, “The private sector has a key role to play in supporting the achievements of the nation’s development priorities, of which, education is a critical pillar. As key sponsors and partners in this initiative, our aim is to continue to create and be a part of key interventions that will promote and advance the achievement of our education goals.”

Christine Najuuko, The Lead Convener, African Debate Championship said, “The essence of this debate is to bring together the youth from different African countries to debate and discuss issues concerning Africa in order to bring up youth and children who can impact society. We believe training in honourable discussions, agreements and disagreements, many battles can be sorted out. The challenges in Africa are the same and the debate will discuss issues concerning various African countries and hopefully draw feasible solutions for Africa’s challenges to move forward.”