December 19, 2018 in Communications, Companies by Editor

December 19, 2018—Uganda’s biggest and oldest knock-out football competition, the ‘Stanbic Uganda Cup,’ is back with […]

December 19, 2018—Uganda’s biggest and oldest knock-out football competition, the ‘Stanbic Uganda Cup,’ is back with more prize money on offer and exciting spin-offs for the fans. 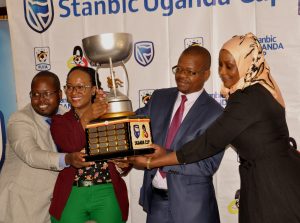 Daniel Ogong, the bank’s Head of Marketing and Communications said Stanbic is committed to supporting and driving growth in the communities in which it operates. “Sports the world over is not just a recreational activity, it contributes to economic development through job creation, skills development, infrastructural investments and business growth. This is why Stanbic is partnering with FUFA to grow football through the Stanbic Uganda Cup and we look forward to an exciting and competitive season,” he said.

The prize money has been increased from UGX 90 million to UGX 120 million (judt over $32,000) with the winning team walking away with UGX 40 million, the runner-up UGX 20 million, the semi- finalists UGX 10 million each, the quarter finalists UGX 5 million and teams that finish in the Round 16 will each get UGX 2.5 million. Draws for the Round of 64 were conducted early this week.

The Stanbic Uganda Cup has been played since 1971 with the first winner being Coffee SC who beat Simba FC (Army team) 2-1 in the final. Since then 24 different teams have won it with the record winners being Express FC and current holders KCCA FC who have each won it 10 times.

FUFA President Eng. Moses Magogo welcomed the development saying it will help grow football in the country. “We are excited to continue our partnership with Stanbic Bank in growing football across the country. The Stanbic Uganda Cup is the biggest sports competition in the country involving over 175 teams and 3,150 players from the first division to the fifth division as well as non-league teams.”

He said, “The competition has been played since 1971 with the winner representing Uganda in the CAF Confederations Cup. It is a tournament with a very rich history and we thank Stanbic for their sponsorship which is helping to revive football across the country.”

The 2018/2019 season resumed on December 1, with pre-qualifier games taking place across the country in all the eight football regions.