June 7, 2017 in Companies, Investment by Editor 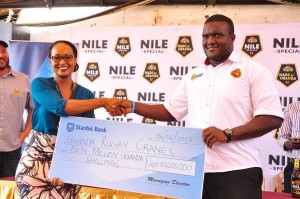 The captain, Brian Odongo, is first to receive the cheque from Sonia on behalf of Stanbic Bank.

June 7—Stanbic Bank Uganda has boosted the Uganda Rugby Cranes with a  UGX50 million, (nearly $14,000) cash sponsorship package to help with players welfare as the team gears up for a series of crucial matches starting this weekend.

In the next couple of weeks, the national team is taking part in the Elgon Cup against Kenya, the Gold Cup tournament and World Cup qualifiers for Japan 2019. The first leg of the Elgon Cup is being hosted in Kampala while the return takes place in Nairobi

Handing over the dummy cheque, Sonia Karamagi Kasagga, Stanbic Bank’s Senior Marketing Manager said, “Stanbic Bank has been a proud supporter and sponsor of the Rugby Cranes for the past two years now. The Uganda rugby cranes have been able to sustain playing on the top level in the continent. This has been possible, because of the hard work put in by the players with excellent support from the Union which is the reason we continue to support this sport.”

Thanking Stanbic for their continued backing, Ramsey Olinga the CEO of the Uganda Rugby Union said, “We are very grateful for all the support Stanbic has given Uganda Rugby Cranes over the years which has been an important ingredient to our success.

On behalf of the Union I can assure you that given the commitment of the bank and the support of the Union the partnership will continue to yield results and be mutually beneficial for both parties.”

Stanbic Bank Uganda is a member of the Standard Bank Group, Africa’s largest bank by assets. The Group reported total assets of R1.95 trillion ($143 billion) as at December 31, 2016, while its market capitalisation was R245 billion, about $18 billion. 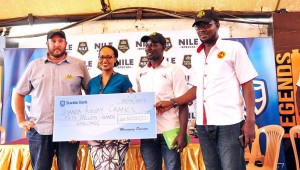 “As a Bank we appreciate the role sports plays in unifying our society and shaping the character of our youth, we therefore look forward to the team performing well and giving us new heroes to cheer for in 2017,” Kasagga said.

The Rugby Africa Gold Cup is a six-team competition which will be played on a round-robin basis from June to August 2017.

Olinga said, “This year the challenge does not get any easier. We need to remain in the Gold Cup, and to do so we have to overcome at least two high class sides. I am confident however that the boys have it in them to succeed and urge all Ugandans to come in big numbers to support the Cranes as they start the Road to Japan 2019.”

Hosted once every four years, the Rugby World Cup is rugby’s centrepiece event. It is the big stage that rugby players from all over the world dream of reaching. Held over the course of seven weeks, it is the third largest sports event in the world after the summer Olympics and the football World Cup. Japan is the host for the 2019 edition which kicks off on September 20th.