May 11, 2017 in Business, Companies, Finance, Financial Services by Editor

May 11–Shareholders in Stanbic Bank Uganda are to receive the largest payout of all local companies listed on the Uganda Securities Exchange after they approved UGX 60 billion (over $16 million) coming their way in dividends. 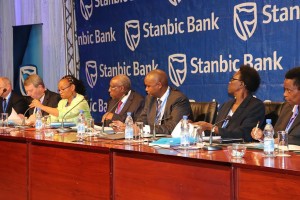 The Board reported that the bank continued to ensure sustainable growth despite the global and local headwinds.

Opening the AGM with over 400 shareholders which was one of the best attended since the bank went public just over 11 years ago, the Board Chairman Japheth Katto said, “2016 was yet another profound year for Stanbic Bank where we continued to ensure the sustainable growth of the Bank and post impressive results despite the global and local economic headwinds.”

He said, “A central factor to our sustainability is our commitment to support and enable the transformation of the lives and businesses in the communities where we operate. To that end Stanbic invested more than 1.1 billion shillings on CSI initiatives in 2016 a 15% increment from 2015.”

Katto said, “When arriving at the proposed pay-out figure of 60 billion Uganda shillings, the Board took into account projected business growth and investment prospects and regulatory capital adequacy requirements. This is having considered the current and projected future financial position of the Bank and impact of stress testing of the capital adequacy position of the Bank to ensure there are no adverse effects on capital requirements over the foreseeable future.”

The dividend was passed unanimously by all the members. Presenting an overview of the operating environment and the banks key performance highlights Patrick Mweheire Stanbic Chief Executive revealed, “Our record profit after tax of UGX 191 billion was achieved despite the challenging market environment with rapidly deteriorating asset quality across the sector. Our 2016 revenue of UGX643 billion was a balanced mix of net-interest income and non-interest revenue, reflecting the strength of our diversified business model.”

He said, “Our  focus on customers paid off as more of them entrusted us with their deposits and opportunities to serve more of their financial needs, as a result, customer deposits reached a record UGX 3.1 trillion for 2016, up a record 25% from the prior year in an industry that grew an average of 9.5%. Total customer loans and advances completed the year at UShs 2.0 trillion just up 3% from 2015 which was a deliberate part of our strategy in a high-interest rate environment.” 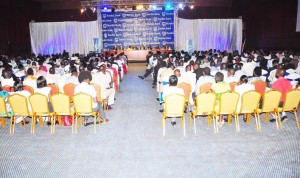 About 400 shareholders turned up for the AGM in Kampala, making it the most well attended since the bank went public 11 years ago.

He thanked shareholders for their patience, support and attending the AGM in such large numbers. Informing shareholders about proposed changes to the Board’s composition Stanbic Corporation Secretary Candy Wekesa Okoboi announced the nomination of three new non-executive directors Greg Brackenridge,  Eva Kavuma and Clive Tasker. The trio were unanimously approved by a show of hands following presentation of their credentials. Mrs Okoboi also announced the voluntary retirement of long serving board member Dr. Samuel Sejjaka after more than ten years of distinguished service to the bank.

Commending Stanbic for its performance NSSF managing director, Richard Byarugaba said, “As the largest institutional shareholder in Stanbic, NSSF is extremely pleased with the bank’s 2016 performance which despite the challenging economic environment registered significant growth. This confirms the bank is being soundly managed and the funds we invested are in safe hands.”

Shareholders were informed that dividend payouts would be effected on or around the 12 June 2017 in accordance with individual shareholders payment instructions.