August 23, 2017 in Communications, Investment by Editor 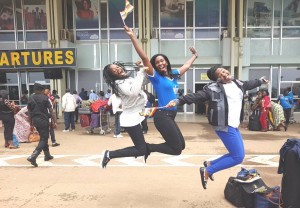 Up, up and away is the only thing on the minds of Evelyne and Tracy as Cathy Adengo bids them goodbye before departure for their all-expenses trip to South Africa.

This is part of the top prize for emerging as the overall winners of the Stanbic Bank National Schools Championship 2017 competition.

In partnership with the Ministry of Education and Sports, SBU launched the championship in February 2017. It saw over 3,000 students from 40 secondary schools participate in a series of educational activities ranging from class debates, quiz competitions and dynamic group projects.

While seeing off the winners, Daniel Ogong, Head of Marketing at Stanbic Bank Uganda said, “One of our core initiatives as Stanbic Bank is investing in education, with a strong belief that the development of any country begins with the proper education of its young people.

He said, “We trust that competitions such as these, among students, are one clear way to improve academic performance. This competition therefore aims to encourage and challenge the students in critical thinking and provide exposure to vast knowledge beyond the classroom.” 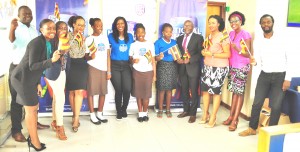 Cathy Adengo, Head of Communications and CSI Stanbic Bank said, “Mary Hill High School managed to impress the judges and the audience with their ‘Co-operative Union Project Proposal’– Bank Simulation Project that scored 83%.  On top of an all-expenses paid trip to South Africa, part of the prize was a solar system for the school worth UGX20 million.”  She suggested more schools participate in next year’s competition.

The first runners up was the team of Kibuli SS from the Central region who walked away with an Apple iPad Air 2 each on top of winning a fully installed water system worth UGX10 million for the school.