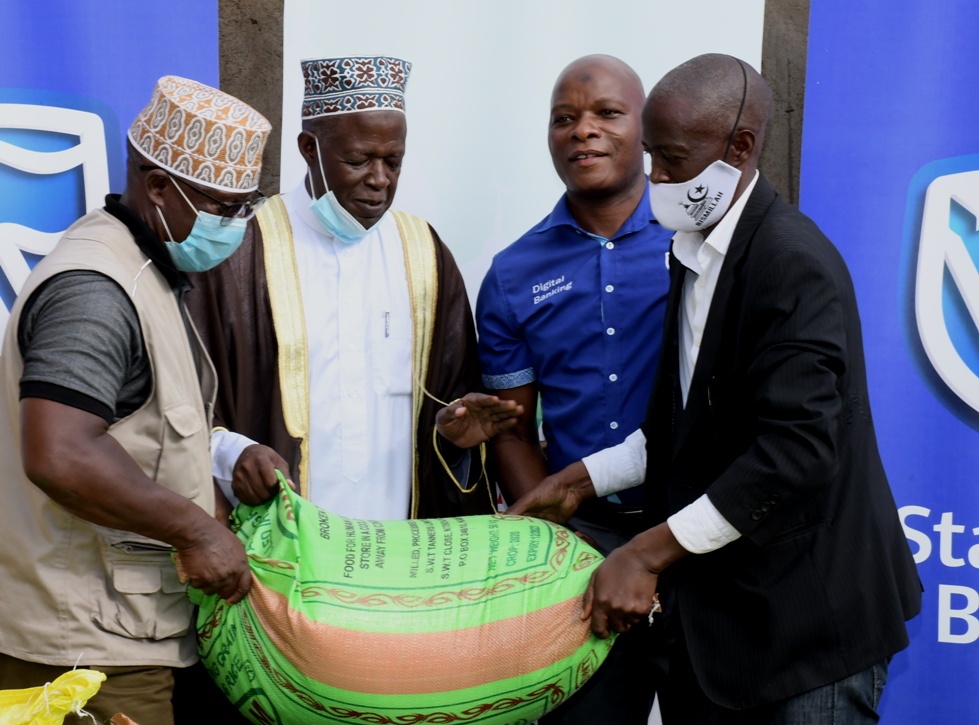 Ali Lwanga (second right), the Regional Manager Greater Kampala, hands over the items to Sheikh Sserwada Hamid (second left) at the Office of the Supreme Mufti in Kibuli recently.

Stanbic Bank Uganda in partnership with Salam Charity Foundation will be donating foodstuff items to different Muslim community in the country in respect of the Islamic pillar of Zakat (alms giving), as they observe the holy month of Ramadan.

Ramadan, which is the ninth month of the Islamic calendar, is observed by Muslims worldwide as a period of fasting, spiritual reflection of faith, increased devotion to prayer and worship, almsgiving and pilgrimage to commemorate the first revelation of the Quran to Muhammad.

As part of their Corporate Social Responsibility, Stanbic Bank will be donating food stuff items inform of sugar, rice, posho and wheat flour, cooking oil, salt and soap worth UGX 35 million distributed to different mosques across the country. The bank with the support from Salam Charity Foundation will start the donation in Kampala at Kibuli mosque and UMSC – Gadhafi then proceed to Iganga, Mbale, Masaka, Mbarara, Masindi, Fort portal and finish with Arua.

While receiving the donation at the Office of the Supreme Mufti, Kibuli Sheikh Yakuba Luwalila,said Ramadan is a reminder for the Muslim to seek guidance, forgiveness, devotion and deep connection with Allah. While fasting might be the most commonly known aspect of Ramadan, charity is also a key part of the month, with the practice of Zakat or giving of alms to the poor and needy playing an enhanced role for Muslims.

He added,“During Ramadan, when you give, you make a difference in someone’s life, society, and nation and as they giver receive seven times more rewards for every good deed done. That is why, I want to encourage each and everyone to selflessly give, not just for the good the charity does for the receiver, but for the spiritual benefit it provides the giver.”

Ali Lwanga, the Regional Manager Stanbic Bank Uganda, encouraged the Muslims to observe all five pillars of Ramadan and thanked them for the immeasurable support given to the bank.

Lwanga said, “Ramadan provides institutions like Stanbic Bank with the opportunity to give back to the Muslim clients we serve, demonstrate a spirit of brotherhood, show empathy and increase the act of charitable giving.

Stanbic Bank continues to reaffirm its commitment to supporting and transforming the lives of people in the communities, they serve. Through the different Corporate Social Responsibility programs, the bank is able to focus on sustainable programmes that have a positive impact and make extraordinary efforts to uplift individuals and society.