October 15, 2020 in Companies, Investment by Editor 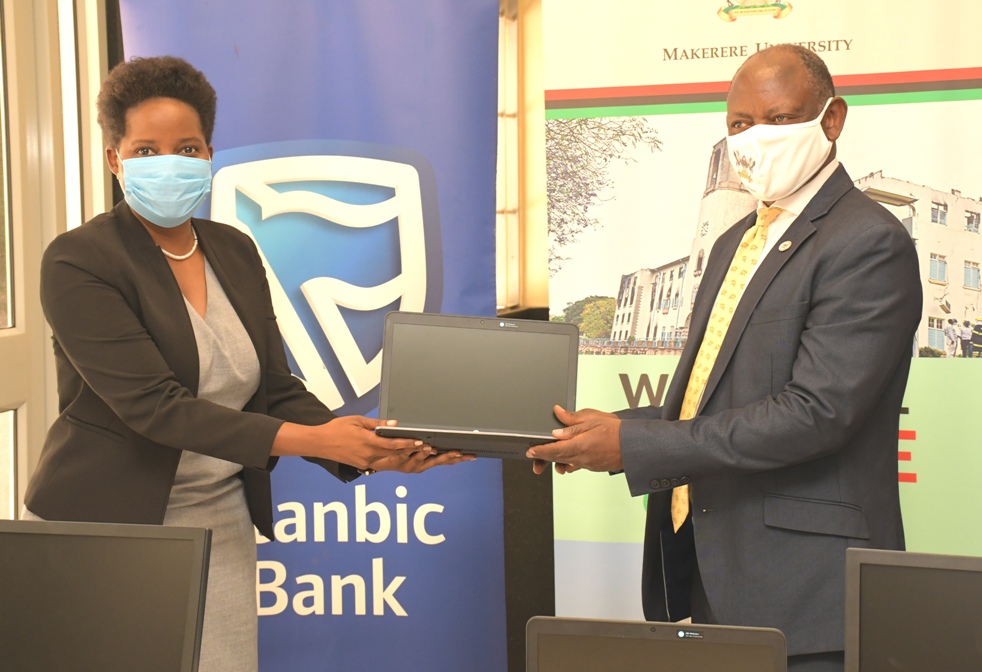 Handing over the computers, Juuko said it was an honour to respond to the recent appeal by the Vice Chancellor Prof Barnabas Nawangwe (right), to work together and rebuild this iconic establishment.

Commonly referred to as the ‘Ivory Tower’, the iconic building caught fire during the last week of September in a case still being investigated by police and other relevant authorities. However furniture and office equipment for several departments including human resources, finance and public relations were destroyed as well as much of the roof.

Anne Juuko, Stanbic Bank Chief Executive said, “This donation is key for Stanbic Bank as education forms the key pillar of our Corporate Social Investments. We believe quality education is critical to achieving social and economic growth. Makerere holds a very special place in our hearts and for the country as a centre of knowledge and excellence. It is therefore an honour to respond to the recent appeal by the Vice Chancellor Prof Barnabas Nawangwe, to work together and rebuild this iconic establishment.”

Prof. Nawangwe is leading a funds raising drive to pay for restoration of the Main building. Established in 1922 as a humble technical school, Makerere University is one of the oldest and most prestigious English universities in Africa. In January of that year, the school, which was later renamed Uganda Technical College, opened its doors to 14 day students who began studying carpentry, building and mechanics.

Since then, Makerere has steadily transitioned into an international institution offering not only day but also evening and external study programmes to a student body of about 35,000 undergraduates and 3,000 postgraduates (both Ugandan and foreign). It is also an active centre for research.

Stanbic Bank has had a longstanding relationship with Makerere University. Two years ago, the Bank paid for all the renovation works of the Sir Albert Cook Medical Library. It is also funding research for the Makerere Sanitation Project and in the recent past donated computers for the university’s Revenue Services Unit (MURSU), to help streamline student processing.