March 28, 2018— Amidst a recovering economy where private credit growth remains subdued, Stanbic Bank Uganda (SBU) described its full year performance for 2017 as solid, notching up a UGX 200 billion ($56 million) net profit despite a hit on interest income due to the falling Central Bank Rate (CBR), but the bank was still the dominant lender in the country. 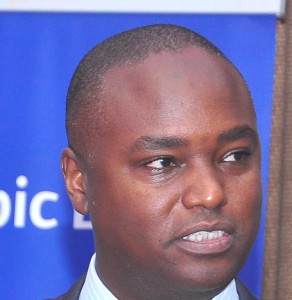 Mweheire said Stanbic has one of the lowest lending rates of all banks active in the Ugandan market.

“As a sign of confidence in the bank’s resilience, our customer deposits grew by approximately 18% from UGX3.06 trillion to UGX3.62 trillion representing 20% of all bank deposits in the country. In fact, of the UGX168 billion in net industry credit growth, Stanbic’s growth represented over 80% (UGX157 billion) which meant the bank played a significant role in providing credit to individuals and businesses,” Patrick Mweheire, the SBU Chief Executive said today when announcing the bank’s latest financial results.

He said SBU played a key role in supporting Uganda’s continued economic recovery and this was reflected in the bank’s overall performance. Uganda’s economy slowed to below 5% in 2016 and 2017, but the expected $15 billion investment in the budding oil and gas sector is seen as a leading driver for renewed growth in the coming years.

Mweheire said, “Our balance sheet grew over UGX800 billion to UGX5.4 trillion. This allowed us to support much larger national priority projects including the spread of much needed infrastructure across the country. In 2017 alone, we provided financial instruments worth UGX1 trillion to contractors, suppliers and executing government agencies. These included bank guarantees, Letters of Credit, bid bonds among others.”

He said the bank’s policy of tracking adjustments to CBR with equal revisions to their Prime Lending Rate (PLR) as playing a big part in promoting credit growth with the bank reducing its PLR by over 7.5 basis points over the past 18 months, “At just 17.5% Stanbic now has one of the lowest lending rates of all banks active in the Ugandan credit market.” Stanbic Banks overall loan book grew by 8% to UGX2.13 trillion up from UGX1.98 trillion.

Referring to the bank’s profitability, Mweheire said the bank managed to achieve much improved efficiencies in both its control environment and management processes helping reduce operating expenses by approximately UGX15 billion year on year.  In spite of a reduction in the banks overall income, this ensured SBU’s net profit for the year actually increased from UGX191 billion to a record UGX200 billion.

“This outcome confirms our customer-centric approach is working. Our investments in the further integration of digital technology within our product and service offering also contributed to a reduction in our cost to serve while giving our customers greater access and flexibility to bank if, when and whichever way they wanted,” Mweheire said.

Sam Mwogeza, the SBU Chief Financial Officer, reported improvements across all key financial metrics, “Our credit loss ratio was just 1.3% compared to 1.8% registered in 2016 and continues to be well below the industry average.In addition, we managed to reduce our cost to income ratio by 1.6% to 50.5% while our earning per share climbed to UGX3.92 per share from UGX3.73 in 2016.”

Mwogeza said, “Our shareholders will be pleased to hear that based off the banks strong performance the board has approved a dividend pay-out of UGX90 billion shillings, an increase of 50% over 2016.”

Following the bank’s record performance, Stanbic recently received the award for best bank in Uganda at the 2018 Global Finance 25th Annual Awards for the world’s best banks. This prestigious accolade is an incredible achievement that demonstrates the bank’s commitment to service excellence and delivering solutions that meet the client’s needs.

Winding up, Mweheire highlighted the contribution of customers, staff and shareholders for the incredible commitment, loyalty and feedback they provided in 2017.“As a result of your support, the bank was able to post record results despite a challenging operating and business environment. I remain optimistic that we will see stronger economic recovery in 2018 supported by improving aggregate demand with moderate inflation in a benign low interest rate environment,” he said.