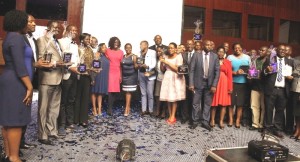 SBU was recognized for being the ‘Best Employer in supporting Learning and Development of its Employees’.

September 26—Stanbic Bank Uganda (SBU) was among several private and public employers that won recognition at the 2017 Employer of the Year Awards (EYA) which were held recently in Kampala. SBU was awarded for being the ‘Best Employer in supporting Learning and Development of its Employees’.

Hosted as usual by the Federation of Uganda Employers (FUE), the theme was ‘Human Resources Analytics: Using people data to create value’. Winners in the different categories were selected on the basis of surveys  involving  the relevant companies and SMEs with this specific theme in mind.

The Federation of Uganda Employers since 2001 has run EYA once every two years, in collaboration with an independent reputable and management consultancy team from Makerere University, to survey existence and reward outstanding execution of world class HR practices premised on the known fact that every organization is only as good as its people.

Guest of Honour, Dr. Chris Baryomunsi, the State Minister for Housing who represented the Speaker of Parliament, Rebecca Kadaga, commended FUE for the EYA initiative and suggested more public institutions participate since the government is the largest employer.

“I appeal to other public institutions out there to also participate in future surveys, because Government is the largest employer and as the public sector we can learn as much from participating in such initiatives as well as the private sector learning about the good things we have and how we do them,” he said.

Findings for the latest survey were conducted in 2016/2017.  The criteria included among other factors, how best companies follow the Employment Act 2006, the Occupational Safety & Health Act, the Labour Unions Act 2006, the Labour Disputes (Arbitration & Settlement) Act 2006, the Workers Compensation Act 2000, the NSSF Act 1985 among others.

In addition FUE recognized and awarded Eng. Martin Kasekende with a  Lifetime Achievement Award, Most Benevolent CEO of the year – Dr. Andrew Seguya.  Rosemary Ssenabulya, the outgoing FUE Executive Director was recognized with an award for her distinctive service to the employer fraternity. Ssenabulya thanked all the participants, appreciated the support of sponsors and support of the entire EYA team that made the event a success