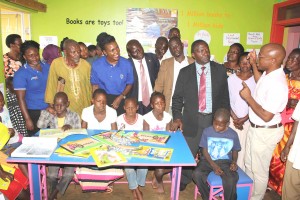 Children browse through the new books as Maurice Muhasa (right), the KKK founder gives some insights into its activities to the visitors.

December 11—Stanbic Bank Uganda (SBU) in partnership with Smart Toto, have launched the very first Community Library and Flourishing Centre in Mpigi, aimed at promoting literacy development at the Kaleke Kasome Children’s Centre (KAKA) SBU donated over 3,000 quality books which will also help nurture the reading culture in both children and adults.

Speaking during the handover ceremony in Mpigi district, Cathy Adengo, Head of Corporate Social Responsibility Stanbic Bank said, “We are grateful to be a part of this wonderful cause, in setting up the Flourishing Centre that will facilitate the development of literacy within the communities of Mpigi. We believe that access to quality education is vital for the growth and development of every child which in turn contributes the achievement of sustainable development in our communities.”

KAKA is a non-profit girl child initiative and safe haven based in Mpigi with an open-door system that incorporates reading activities and training based on girl empowerment through educating the men and boys, as well as women and young girls on gender equality and entrepreneurship skills.

The centre will house fully stocked libraries complimented by literacy programs and lesson plans for both adults and children of the community, with training on learning support programmes for caregivers; designed to address the literacy needs of Mpigi residents. These literacy needs range from illiteracy in adults and out-of-school children, inability to comprehend English stories at primary level, to disinterest in reading material. 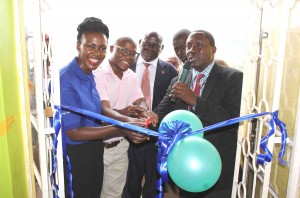 Maurice Muhasa, Founder of Smart Toto said, “Community efforts to sensitize and educate parents, teachers, and caregivers in local communities on the benefits of nurturing a reading culture in children and adults go a long way in empowering whole communities to reap the highest rewards throughout their economic lifespan.”

Richard Senoga, Mayor of Mpigi District thanked Stanbic Bank for taking the initiative to support the foundation. He said, “As far as support towards the community centre goes, this is one of the biggest we have received towards the development of children and youth in our community.  This contribution greatly supports Government’s National Development Goals to provide quality education for our communities. The community Library is significant milestone for the district and we look forward to seeing the expansion with more classrooms to accommodate the influx of children and programmes offered.”

The girl child in Mpigi district is faced with several social disadvantages including defilement, molestation and early teen pregnancies. According to a World Bank report released this week titled, ‘Accelerating Uganda’s Development: Educating Girls and Ending Child Marriage and Early Childbearing’, the largest economic benefits from ending child marriage would result from a reduction in population growth and thereby higher standards of living and lower poverty, with those benefits growing over time, potentially reaching 2.4 billion dollars by 2030.”

The Foundation currently serves over 150 children right from pre-school to teenage age groups.