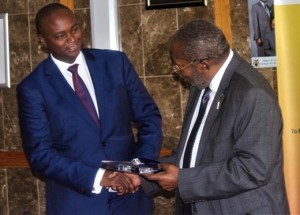 Mutebile (right) hands over the Primary Dealer Award to Mweheire at the BoU headquarters in Kampala recently.

He said the bulk of these funds are used to finance construction of much needed national infrastructure projects so vital for trade and economic transformation.

Handing over the award at BOU headquarters in Kampala, Prof. Emmanuel Tumusiime Mutebile, the Governor Bank of Uganda said, “I wish to acknowledge the role that this year’s award winner Stanbic Bank Uganda Limited has played especially for participating in the primary auctions, market making capabilities, consistent pricing as well as timely market intelligence. Because of their effort, they have been able to ensure efficiency in the operations related to the government securities market at the central bank.”

Government securities include treasury bills and bonds which are traded in the secondary market. The secondary market is where previously issued financial instruments such as stock, bonds, options, and futures are bought and sold.

Stanbic Bank Uganda is a member of the South African-based Standard Bank Group, Africa’s largest bank by assets. At the end of December 2017, the Group reported assets of $165 billion while its market capitalisation stood at $28 billion.

The UGX5.1 trillion during 2017 represented a 29% increase from 2016. In the same vein, the ratio of secondary market turnover to the total outstanding stock of Government treasury securities increased significantly to 41.0% in 2017 from 28.9% in 2016.