Soroti solar power station will be a critical gap filler

SOROTI, MARCH17- Akello Hotel Annex is one of the finer establishments in Soroti town in eastern […] 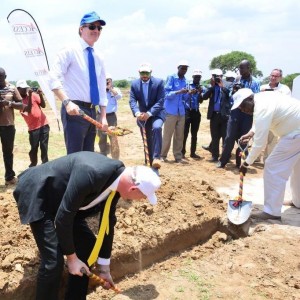 SOROTI, MARCH17- Akello Hotel Annex is one of the finer establishments in Soroti town in eastern Uganda. In the sweltering heat of March however, Tabitha, the front desk officer has one problem. Every now and then, she has to deal with a flustered guest, vexed that the AC in his room is not running.

June may be the last time she has to repeat a tired explanation because Soroti expects to put the frequent episodes of under voltage behind her when a 10MW solar power station goes live in July.

Today, Access Uganda Solar, a tie-up between Access Power MEA and Luxembourg based Eren Renewable Energy (EREN RE), launched construction of the $19million power station at Alaki village, bringing closer the promise of a more stable power supply to Soroti and 40,000 households in the eastern Uganda.

The power station with a projected plant availability of 25 percent will feed directly into the national power grid, supplementing day-time power supply to Soroti.

Peter Lokeris, Uganda’s junior energy minister in charge of minerals said the Soroti plant forms part of government’s efforts to diversify the energy base and reduce dependence on fossil fuels in a rapidly urbanizing country. About 12 percent of Uganda’s installed electricity generation capacity is thermal.

“The government policy is to exploit different energy sources with an emphasis on hydro and renewable,” Lokeris said adding that a stable power supply would unlock the development of small to medium enterprises and agricultural processing in the region.

The project is funded by a combination of equity and long term debt with provided by FMO while the equity is provided by Eren RE and Access. KFW has provided a $9.5 million grant in upfront payment to the developers to buy down the tariff to about 11cents a kilowatt hour.

“The extensive political and international support to this project, unprecedented in Uganda and in the region, underlines the broad willingness to shift boundaries in electricity generation. EREN RE which is a renewable energy investor and a long-term independent power producer is determined to switch light on in many other places in Africa and emerging markets more generally, as efficiently as it was achieved at Soroti,” commented Christophe Fleurence, Vice-President of Business Development – Africa of EREN RE.

Although it will have a nominal capacity of 10MW and a design life of 30 years, the plant is scalable to 20MW because its sub-station is able to handle a further 20MW of solar energy.

“Breaking the ground today marks a major milestone for Access Power, for Uganda and for the development of Africa. Only by working together can we effect real change and answer the urgent need for power of people in Africa. According to the International Energy Agency, 60% of Africa’s population are living without reliable electricity supplies whilst as a continent it has attracted $25 billion in investment in renewables in the past six years.  Our company brings innovation, expertise and determination to every project we work on and we are particularly proud of Soroti and everyone involved,” said Stephane Bontemps the Managing Director of Access Power.

According to Mr. Wilson Wafula, the Acting Assistant Commissioner for Renewable Energy at the Ugandan ministry of energy, the Soroti plant is one of several solar powers stations in the pipeline. Another group of private investors are mobilizing funding for a 10MW solar farm in Tororo while the Uganda Development Corporation is also exploring the feasibility of a large scale solar power project in northern Uganda.