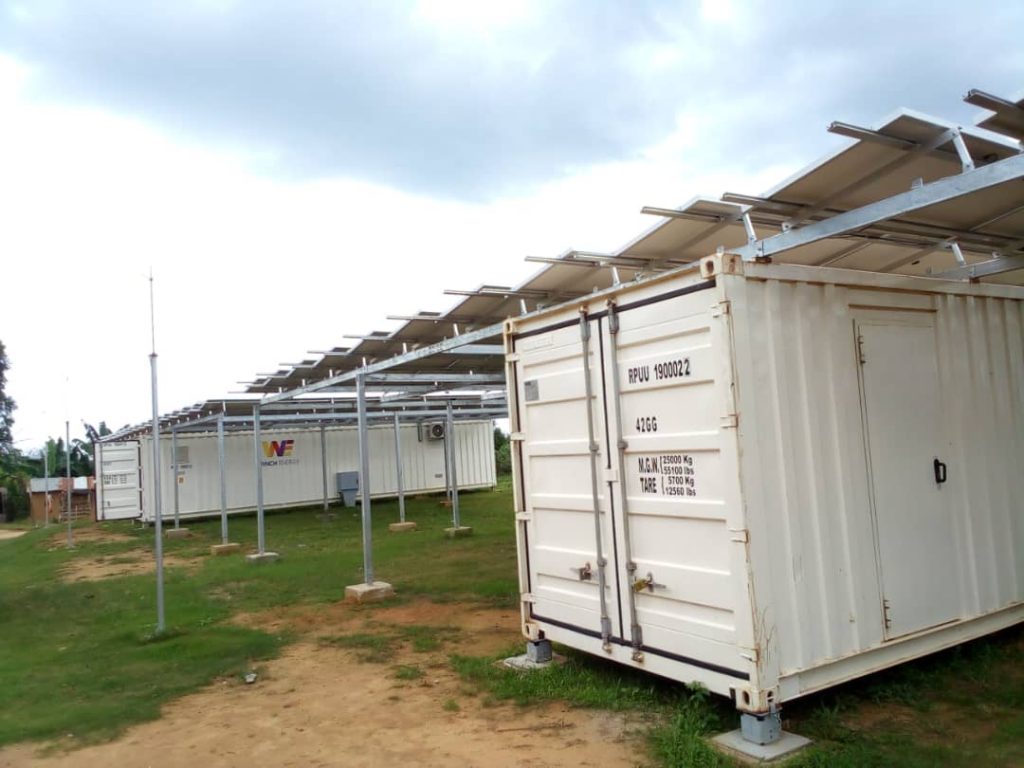 As the mercury approaches 27 degrees Celcius, James Ongwech turns uneasily in his cramped drug shop. Tearing off his shirt to cope with the sweltering heat, once again, he looks at the spot in the ceiling, where he plans to mount a fan when he finally gets connected to the power grid promised two years ago.

He might not have to wait much longer. Lebayango village in Agoro East Subcounty, will be among the first of 25 villages in Lamwo district, that will get connected to the solar mini-grids that independent power contractor Winch Energy is setting up.

After two years of bureaucratic delays and disruption by the Covid-19 pandemic, the 80kw Remote Power Unit for Lebayango is on site and engineers will soon rig up the solar panels that will feed the grid that has been built by the government run Rural Electrification Agency.

Racing to beat the 60pc electrification target by 2030, the Ugandan government with the support of the European Union and the German Ministry for Economic Cooperation BMZ, have turned to solar-mini-grids to deliver commercially productive electricity to isolated communities. Lebayango and the other 24 villages in Lamwo district as well as another 15 in Isingiro district in southern Uganda, qualify for the intervention because they are not likely to get connected to the national grid in the next ten to twenty years.

The USD4 million project with a 60pc subsidy component, is expected to serve between 2300 and 3000 users in Lamwo where the 25 mini-grids will have a combined generation capacity of 1Mw.

Ongwech who paid USD20 for the connection that will bring power to his door, will also be paying a consumer tariff of $29cents per kilowatt, thanks to the EU subsidy and government’s in-kind contribution of land for the solar stations and the distribution grid, valued at USD0.8 million.

Nyeko Bongo, an elder in Lebayango, hopes that the availability of electricity will not just to bring “the light,” as electricity is called many parts of Uganda, but also help stimulate the economic activities that can engage the youth in productively.

“The young men in the village are idle, when power is available, they can set up small businesses such as barber shops and phone charging stations,” Bongo says.

Unlike the power off photovoltaic solar units, the power coming off Winch Energy’s dual channel Remote Power Units, is converted into alternating current and is available 24 hours a day. The power banks in the system store enough energy to feed the grid even without new input from the sun for up 120 hours at a time.

But one can do a lot more with the mini-grid. The power can be stepped up to three phase, enabling the operation of light industrial machinery such as wood working machines, welding and other industrial applications. It is also believed that availability of power will initiate some kind of substitution at local level, bringing to the communities, simple services and products that they have previously had to get from elsewhere. Winch Energy is also responsible for training communities on how they can productively use their newly acquired electricity.

According to Mr. Alex Wanume, Winch Energy’s Country director for Uganda , the $29cts consumer tariff is the lowest one can get for solar fed mini-grids. While photovoltaic systems have achieved the economies of scale to compete with hydro on the tariff, the absence of a storage system to maintain supply after the sun is down, is a drawback.

Under the third edition of its National Development Plan, Uganda aims to have 60 percent of its population with access to electricity by 2030. Today, only 21 percent of the population has access to electricity supplied by either hydro, thermal or solar. Expanding the reach of the national grid continues, but it is a tall order. Some communities are simply too small and too far away from the nearest service point, to justify grid extension. That makes the solar mini-grids an attractive last mile solution.

Winch Energy’s solar power stations also have a shorter gestation cycle making them ideal for quick deployment. Now that all the policy and fiscal issues have been sorted out, the Remote Power Units which come pre-installed in 40ft containers can be set up an activated within weeks, once in the country.

The Lamwo an Isingiro mini-grids are a pilot whose experience will be used to adopt the technology on a larger scale. Before securing the EU/Government of Uganda contract, Winch Energy had already built a solar mini-grid on Bunjako Island, 70km south of Kampala, where two stations with a combined capacity of 120Kw have been installed. The tariff is Bunjako is $35cents because Winch Energy only got a partial grant from Total Energies and the Rural Electrification Agency, to set up the $1 million project.

Consumers in Bunjako also pay a USD78 one-off fee, for a one lighting point and one socket connection. Without the grant, the same connection would have cost consumers USD194.

To lower the tariff for commercial and industrial users in Bunjako, Winch Energy is in talks with the Electricity Regulatory Authority ERA, to design tariff bands within the $35 composite tariff. Winch Energy says that so far, they have received 5 applications for industrial use in Bunjako, where 85 consumers have already been connected to the 80Kw station in Ssenyondo village.

“A key difference between a solar mini-grid and solar photovoltaic units is that in our case, the power is converted to AC and stepped up to three phase. That allows industrial activity to operate,” Wanume says.

Even within a single community, the generation units have to be replicated because the service grid can only operate optimally within a radius of 800 metres.  Beyond that distance, the power decays so fast that the current will be too weak to meet the purpose.

“Electrification is one of the backbones for driving the development of Uganda. Alongside grid extensions by REA, solar mini-grids are going to be key to increasing the number of people who have access to electricity,” Wanume says