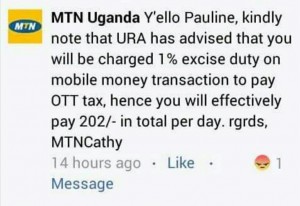 July 1, 2018 – There was  a marked drop in the chatter on popular social media sites Whatsapp and Facebook today, as taxes on social media and mobile money transactions took effect.

Access for users that were unable to pay the tax was immediately suspended by the teleco’s.

The Ugandan parliament approved a tax of 1pc on transactions involving sending or receiving money via Mobile Money services as well as a daily levy of Ushs 200 for the use of Facebook and Whatsapp with effect from fiscal 2018/19 that started today.

The proposal was criticised by civil society groups who see it as a set back for financial inclusion in Uganda where 22pc of adults are financially excluded while another 20pc use informal informal financial services.

During budget presentation on June 14, Finance Minister Matia Kasaija steered clear of the hot-button issue of taxes on digital services, leaving many exposed to rude awakening today when the twin levies went live.

Telco’s were not immediately available to comment on the impact of the taxes but Mobile Money users will be hardest hit and physical movement of cash will become cheaper on large volumes over shorter distances. For instance, the UGX 99,500 full transaction cost of sending and receiving UGX5 million is UGX 39,500 higher than the cost of a return journey bus ticket for the 406 kilometre journey from Kabale to Kampala.

Alternatively, the same business pair will incur a cost of just UGX 2000, if they opted to have the money deposited with a commercial bank.