April 19, 2017 in Infrastructure, Investment by Editor 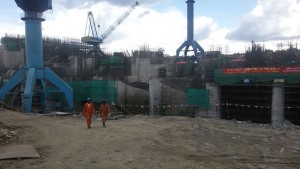 When completed the Isimba hydro-electric dam project will add nearly 190 MW to Uganda’s national grid with most of the money borrowed from the Chinese government.

April 18–A weak global macroeconomic environment and low commodity prices for much of last year slowed the rate of breaking ground for new construction projects across Africa according to financial services consultancy firm Deloitte. But the report is not forthcoming in providing new alternative sources of funding to help bridge Africa’s infrastructure gap.

Findings from its 2016 edition of Africa Construction Trends Report, shows that 286 construction projects with a total value of $24 billion had been started by June 2016. These are projects valued at least $50 million, but collectively this criteria fell by 5% year-on-year, while the total value decreased by 14%, in part largely due to a  diminished appetite from major financiers, except the Chinese who happen to be relatively loaded.

Last year, there were 43 projects valued at $27.4 billion across East Africa. For purposes of the report, the region takes in Burundi, the Comoros, Djibouti, Eritrea, Ethiopia, Kenya, Rwanda, Seychelles, Somalia, Tanzania and Uganda and is home to 15% of construction projects, valued at 8.5% of the total.

The report shows that Kenya as the regional powerhouse, with 11 projects, has the greatest number of large infrastructure projects, 25.6% of the total. Kenya is closely followed by Ethiopia and Uganda, each with nine projects, and then Tanzania with eight projects.

However, since his election in October 2015, President’s John Magufuli begun implementing austerity measures in an effort to reduce the widening budget deficit. This has included the rationalising of ambitious capital projects and cutting state spending.

The suspension of the Bagamoyo Port Project (worth $11 billion) has seen a significant decrease in the value of ongoing projects in East Africa. The Bagamoyo Port Project – which would become the largest port in East Africa – was suspended by Tanzania’s new government, choosing instead to focus more intensely on the previously delayed ports of Dar es Salaam and Mtwara. The Bagamoyo Project included a new port, supporting rail and road networks and an industrial park. It is not yet known when construction will resume.

The Transport sector accounts for the greatest share of projects, with 15 Road and Bridge projects currently underway. Energy and Power projects are also significant, making up just over a quarter of all projects, and account for over $10.7 billion of investments. Energy supply and access is an integral part of the East African Community’s (EAC) Development Strategy. The EAC has implemented a regional strategy to scale-up access to modern energy services.

Of the 11 Energy and Power projects, six are renewable energy focused. The region is home to four hydropower projects, one solar project and one wind project. The renewable energy sector accounts for $8.4 billion with Ethiopia’s Grand Ethiopian Renaissance Dam (GERD) and Hydropower Project, valued at $4.1 billion, the largest project in the region. The GERD’s 6,000MW capacity is an important component in Ethiopia’s strategy to become carbon neutral in 2025.

In all these projects, governments own the majority of projects (86%), while only 2.3% are owned by Private Domestic companies. The remainder (11.6%) are owned by German and British companies.

African Development Financing Institutions (DFIs) and China together fund nearly half of all mega projects in the region, with each funding 23.3%. International DFIs are the next most prominent funders, with 18.6%, followed by Other funders (14%) and Governments (11.6%).

China is also the most visible builder, constructing 41.9% of all projects. Private Domestic companies are very involved in the building process with 25.6% of projects. Companies from Italy, Lebanon, the Netherlands, Portugal, Switzerland, the UAE and the United States together make up 14% of contractors.

East Africa’s projects are highly concentrated, with the 10 largest projects making up 70% of total projects by value.Four renewable energy (hydropower and wind) projects account for the greatest share of these projects. The Lake Turkana Wind Power Project is the single largest private sector investment in Kenya’s history. Once completed, it will provide 310 MW of power to the grid, approximately 18% of Kenya’s installed capacity. Transport projects – all three being railway projects – make up three of the top 10 projects.

The World Bank and others say sub-Saharan Africa needs $90 billion annually through to 2020, to meet its infrastructure gap. Almost half of Africa’s economies are dependent on a single resource export for
more than three quarters of their export revenues.

Once again, like so many other advisers, Deloitte says governments need to structurally change and diversify away from being resource-driven and towards more value-added and services-orientated economies in order to thrive despite commodity price slumps. In other words, move into those economic areas already dominated by the Americans, Europeans and Asians who have carved out deep niches and protected them with some very sleek protectionist ploys.

As a region, West Africa had the most number of projects with 92 and also the most in terms of value at $120 billion. However, South Africa was the single country with the largest number of projects (41) followed by Nigeria (38). North Africa saw a significant jump in the number of projects. These increased by 44.8% while the value of projects increased by 195%, signifying an increase of confidence in the region as much of the turmoil following the Arab Spring in 2011 has calmed down and the political situation in a number of countries like Egypt and Algeria has stabilised.

To continue financing infrastructure projects, a number of African countries have turned to alternative financing measures. After the global financial crisis in 2008, nearly half of all African countries issued sovereign bonds as a way of financing social and development goals after bilateral loans and grants from the EU and the US dwindled.

Eurobonds (usually denominated in US dollars) are seen as a cheaper source of alternative financing. Both Kenya and Ethiopia used funds from their Eurobond issues in 2014 (Ethiopia with US$1bn and Kenya issued $2 billion) to finance large scale infrastructure projects, including a special economic zone (SEZ) and a railway project. The majority of Africa’s Eurobonds will reach maturity between 2021 and 2025. As a continent, Africa holds approximately $35 billion in Eurobond debt.

As African currencies have depreciated against the US dollar, the debt servicing costs of the bonds have risen rapidly in local currency terms. In addition, many African economies such as Nigeria, Mozambique and Ethiopia are foreign currency shortages. If Eurobonds are invested in non-income generating infrastructure, such as social infrastructure, sustainability of the bonds becomes threatened. Gabon, Ghana and Rwanda have all used a portion of the proceeds from their debt issues to re-finance existing public debt.

If the cost of debt rises too rapidly, many African countries may find themselves defaulting on their debts, putting future infrastructure spend at risk.