February 13—Sir Paul Collier, the widely respected Oxford economist, has advised the government to focus on […]

February 13—Sir Paul Collier, the widely respected Oxford economist, has advised the government to focus on agri-business firms that can turn the country’s comparative advantage in agriculture into profits and act as locomotives for growth. 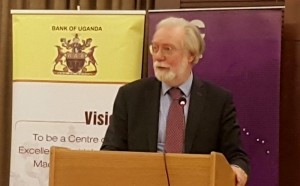 Sir Paul said competing with China is not easy, but Uganda can use its comparative advantage in agricultural a basis for encouraging agri-business to develop faster.

“The route to prosperity relies in modern firms. They perform the miracle of productivity. Uganda must look beyond agriculture because with 3.3% population growth annually, land is becoming scarcer. By specialising, firms produce more than farms,” he said.

Sir Paul, the Director of the International Growth Centre and also the Director of the Centre for the Study of African Economies, said Uganda has better competitive advantage in food production and supply because of its climatic conditions. He said however, there is need for faster commercialization to develop agriculture firms that are able to increase productivity and create employment.

“Competing with China is not a walk in the park. But one sector in which Uganda can compete is food. It’s a huge market. There is need to move from subsistence agriculture to modern trade in food that is properly branded with consistent quality standards,” Sir Paul said.

He was speaking during a public lecture in Kampala organised by Bank of Uganda and the IGC. He said there are still many undiscovered opportunities in the agriculture sector, but the government needs to create an environment that enables the private  sector to exploit these opportunities.

“There are opportunities for Ugandan firms in food processing and construction. Food accounts for 50% of expenditure. Construction accounts for 9% of GDP and is the fastest growing. Both sectors are labour intensive and will create jobs,” Sir Paul said. However for these firms to survive, there needs to be the necessary infrastructure, connectivity and regulation.

Prof. Emmanuel Tumusiime Mutebile, the BoU Governor said Africa needs to be conscious of the environmental factors while pursuing commercial farming in order for it to be sustainable. “African agriculture has not been transformed by a ‘green revolution’ and, as a result, the productivity of both land and labour in agriculture is very low,” he said.

He said the manufacturing sector in Africa, particularly in Uganda, has stagnated mainly because there is lack of firms. “In particular, the share of the manufacturing sector in GDP has stagnated in most economies at less than 10%. Formal sector job creation has also been very weak, reflecting the lack of private investment in labour intensive modern businesses,” Mutebile said.

He said, “We just need more firms. At the population growing at 3% a year, there needs to be a process that generates a lot of jobs – and for this you need lots of firms. Let’s start with a decent regulatory environment.”