May 28, 2018—There are strong signs of recovery in Uganda’s formerly depressed cotton sub-sector as production […] 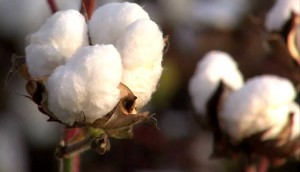 For several years now the CDO has been underfunded, but continues to make efforts to popularise the crop among farmers.

Cotton, along with coffee and tea, have been Uganda’s traditional cash crops long before independence in 1962, but during much of the 1990s and the first decade of this century, farmers’ interest has waned as farm-gate prices have failed to inspire them to invest in growing it.

However the Cotton Development Organisation (CDO) and in spite of being severely underfunded, has been making efforts of popularize the crop even as imports of second hand clothing have limited the expansion to Uganda’s garment and textile industry.

According to the CDO, there are at present about 40 ginneries with a total installed seasonal ginning capacity of around one million bales of lint production (200,000 tons), which is well above the maximum production achieved in the last two decades. Because the textile industry in Uganda has lost a lot of ground to the competition coming from the Far East and to second hand clothing, only around 5 % of the total cotton production is consumed by two local textile factories.

Ssempiija said the government during financial year 2017/2018 supplied a total 2,647 metric tonnes of cotton seeds,  1,230,700 one-acre units of pesticides, 5,156 litres of herbicides, 481 mt of fertilizers and 3,040 spray pumps were provided to about 200,000 households across the country to Improve on their production.

The Minister advised farmers to increase on the areas of acreage saying there’s market for their produce since the government set up a special fund to support ginners to buy cotton from the farmers.

Recently Uganda was selected by the United Nations Conference on Trade and Development (UNCTAD) to participate in a $600,000 cotton value-addition pilot project under the UN Development Account, to encourage the manufacture of by-products in four countries –Uganda, Tanzania, Zambia and Zimbabwe.

In financial year 2014/2015 the government established the Lint Buffer Stock Fund to avail raw materials (lint) to local cotton textile manufacturers to support domestic value addition. The Fund procured a total of 3,000 bales in 2016/17 and 11,500 bales in 2017/18 which were supplied to Southern Range Nyanza Limited and Fine Spinners (Uganda) Limited.

Officials say demand for cotton is expected to rise following other government initiatives as ‘Buy Uganda Build Uganda’ intended to promote local content. A directive is already in place requiring that the uniforms of security institutions in the country, like for those for the police, army and prisons, are made locally.