December 22, 2016 in Business, Companies by Editor 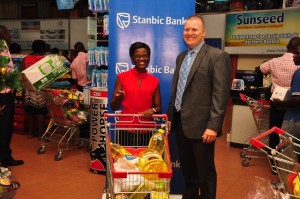 Kampala December 22 – Three lucky shoppers in Uganda had an opportunity to carry home for free as much shopping as they could pick from a store in a minute, during this years edition of Stanbic Bank’s XmasDash promotion.

The winners were selected from among Stanbic customers who had used their credit and debit cards to pay for shopping at participating stores. The promo forms part of a wider campaign promoting a cashless economy.

Unnie Wamala Luwaga, Stanbic’s Manager Digital and Social Marketing, said the campaign which has been running since December9 was open to Stanbic customers who use their visa cards Master debit and debit cards to pay for shopping participating outlets including supermarkets, restaurants, hospitals, fuel stations and children stores. The campaign runs until December 31 2016.